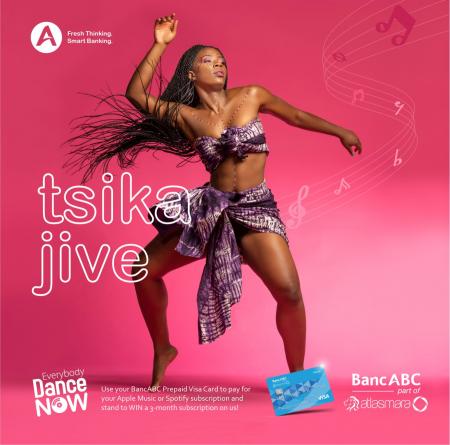 Dubbed, Tsika Jive, the promotion is running from 7 April (yesterday) until 28 April 2021. It is the latest shot from BancABC and they are probably seeking to capitalise on the buzz created by Spotify’s recent launch in Zimbabwe. According to a number of musicians who have Spotify accounts, there has been a spike in the number of streams ever since Spotify officially launched here in Zimbabwe.

BancABC is aggressively marketing its prepaid Visa. Earlier this year they conducted a “free money” campaign where the first 340 to sign up for their prepaid Visa would get a free US$20. All one needed to do to get the free money was to be one of the first 340 to sign up and make a minimum deposit of US$20 and get a free $20. My colleague evaluated the promo as well as the benefits and drawbacks of using BancABC’s prepaid Visa card in that article.

The month before that BancABC had a no charges promotion where you would not be charged for the first US$500.00 of transactions made using their prepaid Visa card. The bulk of people who use these cards rarely go above the $500 mark which means the card was basically free for that particular month for most prepaid Visa cardholders. We saw OneMoney doing this in 2019 and it seems that pays off.

If you do end up taking up BancABC on their offer I would recommend Spotify over Apple Music. Spotify is cheaper and better supported on other devices.