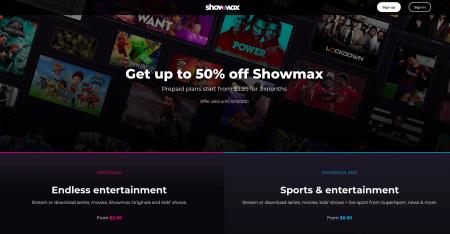 Showmax has reduced the price of its mobile streaming package from US$3.99 to US$2.99 with immediate effect. The 25% price reduction applies to both existing and new customers. If you sign up you get the first 14 days free which is less than half what you get with Netflix.

The price reduction seems permanent, it’s not a promotion:

We can all choose to believe that Multichoice is just being altruistic here but like any business, there are probably being driven by profit and are trying to carve some market share from Netflix who are yet to also launch their own mobile/tablet only plan in Africa.

The new prices for Showmax mobile

Of course, South Africans and Kenyans get to pay the least even though there is more content from both countries there. I would also love to live in a world where we get to pay in our own currency, the reviled Zimbabwean dollar, instead of having to fork out USD each time but that’s probably asking for too much.

It also seems the price reductions did not extend to the Standard and Pro packages which allow you to stream from devices like your smart TV or gaming console. Showmax is however running a promotion where you only pay 50% for the first three months which means for Zimbabweans you pay around US$5.99 for the standard plan.

Most Zimbos don’t know you can get free Showmax

I have been using Showmax for almost 3 years now but it seems, based on the anecdotal evidence from my own life, that a lot of Zimbabweans don’t even know it exists and that you can get it for free if you are a DStv Premium customer. Even fewer people know about Showmax Pro which allows you to pay to stream sports.

Multichoice didn’t do itself any favours when they ventured into the streaming business by betting on two horses. We have DStv Catchup (at least that’s what it is traditionally called) and of course Showmax and often there is a lot of overlapping content between those two and it can get confusing.

They made things worse by introducing Showmax Pro which allows Showmax users to stream sports like the EPL, Laliga, Formula 1 and Cricket in August last year. As far as I can tell the only major draw sport it doesn’t allow you to stream is the all-important UEFA Champions League. Then in December, they launched a DStv streaming-only package that is priced similarly to the traditional DStv.

You can forgive people for getting confused by all this but generally:

There is simply no reason for you to get a DStv streaming-only account. It’s one of those things where you ask yourself repeatedly, “What were they thinking?”