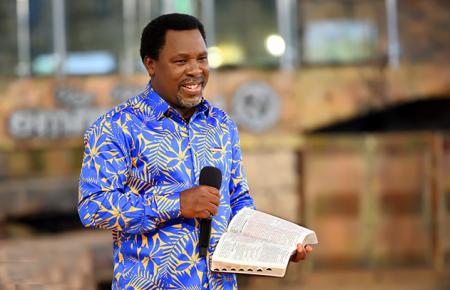 YouTube has suspended popular TV evangelist TB Joshua’s channel (The Synagogue Church of All Nations) on allegations of hate speech. According to a report by CNN, YouTube took this action because TB Joshua posted videos on his channel purporting to cure gay congregants of their sexuality.

“I got to know what happened to YouTube when I saw the viewers complaining… I want you to help me pray for YouTube… Don’t see them the other way around; see them as friends. We need to be strong,”

The suspension came about because a media rights group based in the UK sent a message to YoutTube asking if TB Joshua’s gay conversion videos were in violation of its community guidelines.

“We noticed at least seven videos. In one video, T.B. Joshua slapped a woman and her partner whom he called her ‘second’ (partner) at least 16 times”

Lydia Namubiru went on to say (narrating the video) that TB Joshua claimed that he was casting out the “spirit of women” out of her. The woman apparently then told TB Joshua that she was no longer had any feelings for her partner because of the intervention.

In another video, the Nigerian televangelist reportedly slapped another individual several time and had his dreadlocks shaved. After this, the individual then testified that he was no longer attracted to men.

Youtube has not yet issued a formal statement about TB Joshua’s suspension.

Well… This was bound to happen

Yeah, this is one of those things that was going to get caught out sooner or later. YouTube is very tough when it comes to suspension and channel strikes especially when it involves hate speech or actions that are against a specific group.

Posting “gay cure” videos on YouTube was bold to be honest, given what has been happening the world over concerning the rights and recognition of same-sex couples and how people choose to identify.

It will be interesting to see what YouTube says on this matter, that’s if the company releases a statement about this.