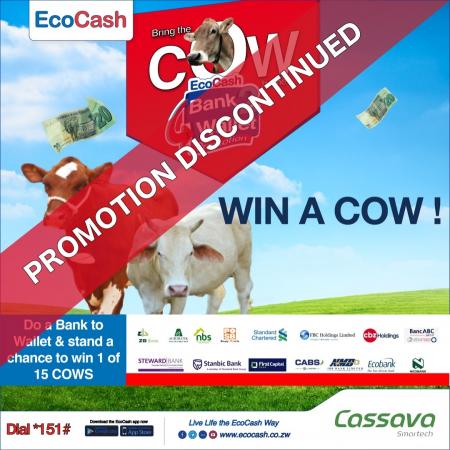 EcoCash over the weekend prematurely cancelled its Win a Cow, Bank to Wallet promo without as much as a word of explanation. This, at face value, reflected poorly on Zimbabwe’s biggest mobile money operator because their previous promotion was lacklustre (on the customer end) and the cancellation of the following promo tanked the value of any other promotions to come because, from the comments on EcoCash’s posts, people sounded like they were done with them.

However, there was something that we failed to consider when we covered the story. Now, the following tippy toes into the realm of speculation, but there are glimmers that show that this was yet another chapter in the war the RBZ and the banks have waged on EcoCash. Because, as I am sure you already know, Bank to Wallet transactions are under RBZ prescribed limits, ZWL$10 000 per transaction and ZWL$150 000 a month.

Furthermore, there is nothing that says that EcoCash couldn’t run a promotion on any of the services it offers. What we may have witnessed, and why EcoCash couldn’t give an explanation for cancelling the promotion, was the RBZ and the banks making a statement on the new order in the payments space.

The balance of power in the payments space

I have to hand it to EcoCash for being inventive with the one and a half transaction promotions it ran. With the introduction of the mobile money limit (ZWL$35,000 a week), banks overnight became the go-to if you wanted to transact without having to “tot up” each purchase to make sure you were still within the mandated limit.

Moreover, the banks made it a hell of a lot easier to open an account. FBC dealt the first blow by giving anyone who wanted an account the chance to open a full KYC account via USSD and the FBC bank app. This was a godsend for the unbanked because they didn’t need the internet or visit a branch in order to open an account and could start transacting as soon as they got an account number.

Seeing the success of this move other banks followed suit but most like NMB and Nedbank allowed only for customers to open KYC-Lite accounts via the various banking platforms. But to be honest it’s better than nothing considering the restrictions that were now on mobile money.

On EcoCash’s side of things, they weren’t going to lie down. EcoCash immediately sprung into action and launched a transaction based rewards program. EcoCash Rewards was a way for subscribers to earn points that would be converted to money once the threshold was reached.

The program was a success, at least for EcoCash, because it brought their value of transactions and volumes back to the levels they were before the RBZ enacted the transaction limits according to POTRAZ’s reports. So, it makes sense that EcoCash would double down on the promotions.

However, the banks are now in control of the payments space which leads us to believe that EcoCash running a promotion that involved the banks was kicking dirt into the eye of the banking sector just when had attained alpha status.

EcoCash bank to wallet promo was cheeky but bold move

I am going to begin this section by commending EcoCash yet again for showing some serious ingenuity. With the conclusion of the rewards program, EcoCash couldn’t pull the same trick twice. They had to target another element of their wallet services to entice users to transact.

The next port of call was Bank to Wallet which is a popular transaction, especially when you want to pay informal traders who prefer an EcoCash transfer over ZIPIT.

Now, here comes the problem. As long as EcoCash continued to run promotions within its own ecosystem, the banks wouldn’t be bothered. However, roping in a transaction that involved bank accounts was going to raise issues.

This is of course because the whole reason for the National Switch directive and mobile money limit was to disincentivise people from using their EcoCash wallets. The RBZ, as previously alluded to, was handing over power to the banks after they were gutted by the rise of mobile money. For EcoCash to incentivise a reverse flow of money (from Bank to Wallet) was a massive problem and could have been the reason why the Win a Cow promotion was abruptly discontinued.

It could also have been the reason why EcoCash never gave an explanation for the promotion’s cancellation, because if we are correct the only body with the power to cancel the promotion was the RBZ, at the behest of the banks, of course.

If it is indeed true that the banks objected to EcoCash’s Win a Cow promotion and got the RBZ to can it. Then they may have, on the one hand, shot themselves in the foot. What I mean by this is that your bank charges you for making bank to wallet transfer.

If the EcoCash Bank to Wallet promotion was anything like the Rewards program then the banks were in line to make something out of this. The amounts may have been negligible because of just how many banks there are spread over EcoCash’s just over 5.5 million subscribers but the point is they weren’t going to lose anything.

On the other hand, whatever money was to be made was nothing compared to keeping EcoCash in its place. The banks are finally at the top of the food chain and the notion of giving customers a reason to transact with EcoCash especially through funds in accounts they house might have been a bridge too far.

In short, making a statement was far more beneficial than any projected income from a promotion run by a competitor.

EcoCash goes back to the drawing board

I may have not made it abundantly clear, so maybe I should begin this section by saying that this is unfair on EcoCash. They were, at least from our vantage point, not doing anything incorrect or unlawful. All they managed to do was to rile up powers that are beyond them.

What EcoCash has most assuredly learned from this (if our assumptions are true) is that they should steer clear of the banks. It will only end in tears if they attempt something that involves bank to wallet or any other promotion remotely related to bank accounts.

However, this should by no means dull EcoCash’s zeal for inventing new ways of increasing transactions. The Rewards program came out of the blue and much like it I suspect that there is more on the way from the country’s biggest mobile money operator.