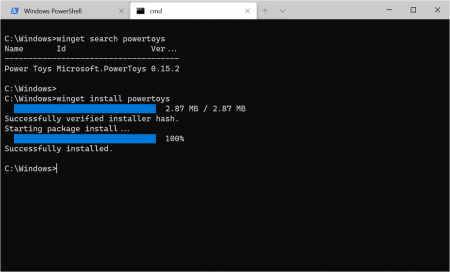 One of the slights often thrown at Linux during the “Linux is a cancer” days at Microsoft was that it was made for amateurs and nerds. The evidence was there for all to see, Microsoft executives would always boast. The biggest drawback was that Linux heavily relied on the command line even when it came to installing, managing, upgrading and removing software. Now in the latest about-turn, Windows has its own command line package manager-winget.

The power of apt

One of the things I love about Ubuntu is its apt aka the advanced package tool. Like its peers such as Pacman, Yum and DNF it has no equal in Windows. It derives part of its powers from the fact that Ubuntu and other similar Distros are open source and very modular. This means you can upgrade, downgrade or remove anything. I mean anything including the kernel(s) i.e the heart of the operating system.

On the server-side of things, you have repositories that contain various types of software. Each package there is signed to make sure it is authentic. While Windows users have to scour around the internet to find VLC and might land on a fake release, in Ubuntu you don’t have to. You just need to fire up apt in the terminal and install VLC.

Unlike in Windows where program files are typically self-contained and large if you are trying to install apt after say, installing kodi or other video streaming software, you don’t have to download everything. Only the missing libraries are pulled and installed. Of course, package managers like Snap and Flatpak don’t do this for specific reasons.

In order to lure more developers from Ubuntu and other platforms, Windows has been adding various developer favoured tools including their Linux Subsystem and it seems winget is the latest jewel in that crown. Besides winget being a pale version of apt and its peers the development and release of winget has been mired in controversy.

You see after years of begging the Windows community had simply come to rely on third-party package managers. Popular among them is a tool called AppGet. Before making winget, Microsoft approached the developer of AppGet and made it as if they wanted to hire him and possibly buy his app and repurpose it as winget.

During this meeting, the developer of AppGet opened up about his ideas and suggestions and even presented solutions to some of the problems and issues that a good Windows package manager should solve. He didn’t get any further job offers or contact from Microsoft and he claims the company used his ideas and solutions in winget without his permission. Sounds familiar to me.

What winget can do

Without a major rewrite of Windows itself, it’s doubtful winget will ever come close to being as powerful as apt but it does have its draws. Currently, you can install, update and remove up to 1 400 packages in the Microsoft Community Repository which is basically a mirror of the Windows App Store.

Being an early release winget is still buggy and there is also the annoying bit, you have to run winget as an administrator. To achieve this you have to actually run the command line program as admin. There is no sudo in Windows either.

Winget works but it kind of reminds me of the old attempts by some in the Ubuntu community to tweak their desktops to look like Windows XP. The similarities were never more than skin deep and the moment you tried to do something “Windowsy” it would explode in your face. winget is like that too.Microsoft has introduced its own Linux