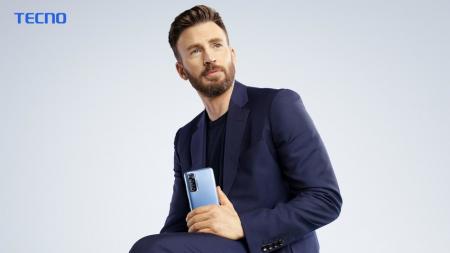 Chinese smartphone maker Tecno, which recently overtook Samsung in market share in Africa has announced that Chris Evans is its new brand ambassador.

It’s easy to see what Tecno is doing here and to be frank, they have done it very very well. Chris Evans who acted as Captain America in Marvel’s cinematic Universe is of the most recognisable people in the world. The success of the MCU and how well he embodied the role of Steve Rodgers has made a household name and this is what Tecno is banking on.

This move will most certainly help turn heads because of how bankable Chris Evans is both as a professional and as a person. If you remember during the sheer calamity that was the Trump Administration, Evans was one of the many stars who were vocal about Trump’s presidency.

You won an election because you ran a campaign predicated on hate, fear, and misinformation. You stirred discord, feigned innocence, bluffed patriotism, and shamelessly wielded schoolyard tactics to distract from your ignorance

His stance won him fans and admirers who may not have even watched the MCU.

This is more about emerging markets than anywhere else

As previously mentioned, Tecno did the unthinkable this year. The Chinese smartphone maker dethroned Samsung‘s hold on the African smartphone market. Many might think Tecno joining up with Cap is about making strides in Europe and North America but I think that Tecno is trying to maintain its foothold in the markets that it already has some of control.

“I am happy to partner with Tecno, an innovative smartphone brand which provides consumers in emerging markets with the newest smartphone technology. Whether it’s a phone call with someone you love or an image you capture to keep as a meaningful memory, smartphone technology is at the center of it all. It is really inspiring to work with such a great brand that stops at nothing to encourage people in those markets to explore more possibilities.”

This isn’t to say that this move might have some effect on other markets, but with what Samsung, Apple and Huawei have been doing elsewhere I seriously doubt it will significantly move the needle.

With these brand deals comes some sort of expectations that the star selected will use the product that they are now the face of. One unfortunate incident that happened in 2018, concerned Gal Gadot when she was caught tweeting a Huawei Ad from an iPhone while she was a Huawei brand ambassador.

Gal Gadot with the Huawei ad… tweeted from an iPhone. Niceeeee pic.twitter.com/aEKJVwoyBL

With the popularity of Tecno in these parts, there might be a few Twitter detectives who might look in now and again to see where the tweets are coming from. Unlucky for you there haven’t yet been any tweets by Chris Evans yet…