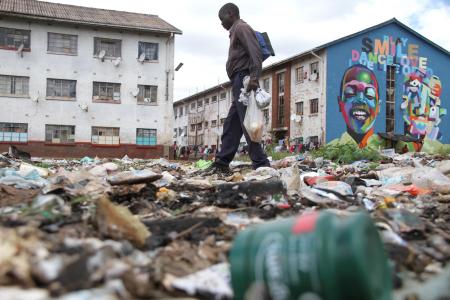 The elders say when elephants tussle, it is the grass that suffers. As local and national government politicians continue to fight and try to sabotage each other, the people of Mbare have suffered. They continue to live in dilapidated flats that probably need to be pulled down and replaced, they lack basic sanitation services and are living in overcrowded conditions.

The people there are often the end of many a but joke. Services like Dial a Delivery purposely avoid serving the area. You get an out of bounds error when you try to order from a Mbare suburb. Often politicians and public figures come there and do “clean-ups” where they sweep a few bits of dirt in front of the camera in a hunt for cheap political points.

Documentary exposes the rot in Mbare

The Newsday linked Heart and Soul TV decided to dig deeper and tell the story of the people in Mbare Hostels from their perspective, in their own voices and it is a story that will bring you to tears. Without politicians to push an agenda or certain narratives what you get is the unvarnished truth straight from the affected people.

As the national and local government continue to fight and undermine each other Mbare Hostel residents have lost more and more. The impoverished people in these flats have multiple families living in each room with curtains dividing each room to give a show of privacy. Never mind the stench of slow-moving sewage here you have literal and visible human faeces everywhere.

The documentary is by no means perfect, oftentimes you have the interviewers asking what sound like leading questions. Then there is its greatest flaw in my opinion. This documentary maxes out at 480p in this day and age that is a cardinal sin in my book.

1080p would have done a great deal of justice to the story and 4K would have been even better. This is a documentary where the makers want us to “see” the plight of the people who live in Mbare hostels however it’s kind of hard to see much especially if you are watching on a big screen. The audio quality is equally unimpressive.

The camera work is decent enough for outside scenes but when it comes to inside scenes and interviews the camera work feels shoddy and lacking-it’s even amateurish and hurried in some cases. Maybe the makers were afraid of being attacked by politically linked mobs. It doesn’t help that the whole documentary feels like an extended news report with very little narration.

It’s a fact that hurts the entire appeal of the documentary. Despite it being over an hour-long there is no gradual exploration of issues at all. Rather with each interview, the same issues are raised over and over again with really no new insight or revelation coming out of it. In the end, the people being interviewed sound like whiny brats and that repetition will erode some of the empathy that they might have received.

Should you watch it?

As already said, it offers an alternative perspective to what you have heard about Mbare. These people are not lazy sloths, they are hardworking people who have been abandoned to their miserable fate. The local and national governments have abdicated their duty here just as they have in most aspects of our lives.

It will not be easy to watch the whole documentary. While their perspective is different, the quality of production leaves a lot to be desired. But for the candid and fearless interviews this is something on par with what we are used to getting on ZTV. HStv should put more technical effort in their next production.