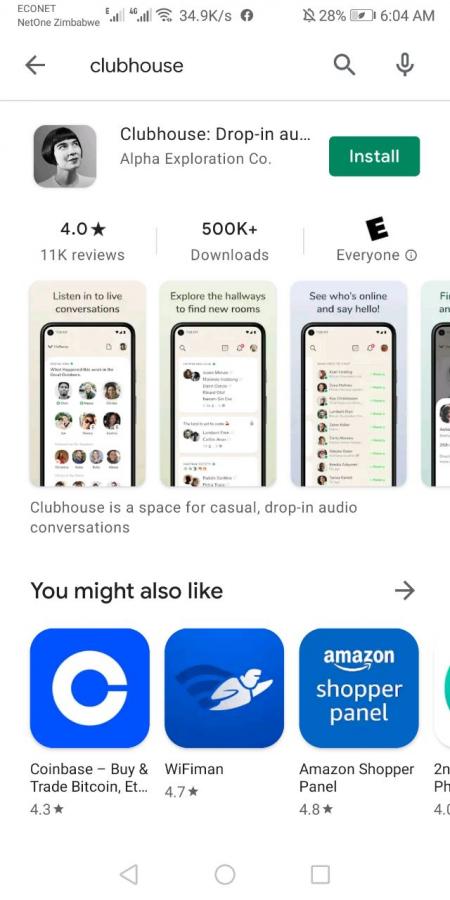 To those who have been curiously following the rise of Clubhouse that overrated audio chat app, I have a bit of good news. You can now install Clubhouse on your Android phone and sign up using your cursed Zimbabwean phone number. The bad news is that’s all you can do. Clubhouse still insists on you waiting for an invite.

Install and beg someone for an invite

To make it seem important and indispensable Clubhouse still has an invite system in place even though it’s now facing possible competition from Twitter, Discord and Facebook. It seems the creators of the app are intent on going down the exclusivity route in order to market the app.

The only way you are going to get on the platform is if someone who is already on the platform sends you an invite. That wouldn’t be a problem were it not for another stifling additional limitation. You can only send out two invites so the rest of us peasants have to wait patiently for those invitations to filter down to us. It would have been nice if Clubhouse had seeded each country with invites.

Personally, I am not the type of person who swoons at every Elon Musk Tweet, I think he is an egocentric narcissist with a bit of talent and lots of luck. I admire his chutzpah but I think he is a loudmouth who likes to make his opinion, even on matters on which he has little knowledge, known. So I am a bit confused by people’s obsession with Clubhouse.

If you, for some reason haven’t heard of Clubhouse it’s an audio chat app. The simplest way to describe it is to call it the modern version of talk radio. It’s an app that allows you to host your own radio talk show. Naturally, you can also tune in to other people’s talk shows. Clubhouse is kind of like Twitter Spaces.

This is the biggest problem Clubhouse is going to face if it sticks to its guns. While it still has to build an audience and potential users big players like Facebook and Twitter have already trained their guns at it. They have already deployed their army of coders to incorporate Clubhouse features into their platforms. For Twitter is Spaces and for Facebook, it’s Live Audio rooms.

There is or will be no need for audiences or starting from scratch. If you already have thousands or millions of followers all you need to do is tell them about your planned conversion and people tune it. I think Clubhouse is missing a trick and overestimating its star power. An Elon Musk Tweet, an Oprah Winfrey interview and the spectre of Vladimir Putin can only take you so far.

As Brutus says, “There is a tide in the affairs of men.” This is Clubhouse’s tide and it’s choosing to omit it. In the not so distant future, they will rue these missed opportunities as they fizzle out into non-existence. That stickiness will become watery and that $4 billion market valuation will race down to zero if they do not Carpe Diam by opening the doors to the rest of mankind as soon as yesterday.

This is me being a sage. Or I am just being bitter because I don’t have an invite.