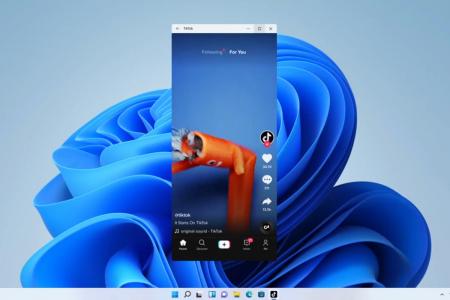 Every time a new version of Windows rolls off the Redmont factory there is a lot of excited chattering from its fanboys and a lot of eye-rolling in the Linux community. This is because more often than not, touted “improvements” and “innovations” that come in the new Windows versions are things the Linux community have had for years.

Then there is the headline clincher, Windows 11 has a feature that will allow people to run Android Apps “natively”. Yeah, right.

You can now run Android Apps on Windows, big deal!

Windows 11 came out yesterday, 24 June and while those who played around with the leaked ISO didn’t discover any surprises apart from refreshing cosmetic changes, it seems the actual final version has one neat trick up its sleeve. It turns out Microsoft will be partnering with Intel and Amazon to bring Android Apps to Windows.

For now, you can search for Android apps in the Windows Store. However, when you try to install an Android app the first time you will have to install the Amazon App Store for Windows. You will then have to sign in using Amazon credentials. Eventually, Windows 11 will come with a revamped Windows store which will sport Android apps from the Amazon App Store. These apps will then run on Windows with Intel’s Intel Bridge tech acting as the magic behind the scenes to make it all work.

Think of Intel Bridge as the opposite of Apple’s M1 Rosetta. Intel Bridge takes Arm-based apps and allows them to run on 64-bit architecture. Rosetta allows Intel-based binaries to run on M1’s Arm architecture. In fact, this might be Windows’ response to Apple’s M1 which can run iOS apps natively. There are a lot of modern apps that don’t run on Windows, this development will fix that glaring gap but is it the game-changer people think it is?

It could also be Microsoft’s attempt to boost the number of apps you can install on its overpriced Surface line. Although some of these tablets/computers run on Arm a number of Surface models do actually have Intel chips. This means an explosion in the number of apps you can install on a Surface Pro. I will admit this might just be enough to make these half-tablet and half-computer models more appealing. I seriously doubt the usefulness of this feature on an ordinary desktop, however.

I don’t think so

Remember what I said about Windows always being behind when it comes to certain innovations? Being able to install Android apps on a desktop Linux operating system is something the Linux world already have. It’s only natural:

So here is the thing Chrome OS, which is also Linux by the way, have had the ability to install and run Android apps since 2016. Both Chrome OS and Android are Google Products so this was a no-brainer for them. Chrome OS even fully supports the Google Play Store. Google being the makers of both Operating systems is something that is bound to guarantee you that the integration you get is rather seamless.

It’s the kind of seamlessness Windows will struggle to match at least for the next coming few years. Intel Bridge is hardware dependent. You need a compatible Intel processor and while it’s true that most processors used on PCs are from Intel and support Intel Bridge this is not always the case. AMD just made a comeback with its Ryzen series and some members of Surface family are powered using Arm.

And here is something else that’s well known in the Chrome OS/Linux world, something M1 users are just finding out, mobile apps are for mobile phones and tablets. Except for a select number of apps, most apps that were designed for mobile devices tend to suck when used on a desktop computer. The makers of these apps only tested them on mobile and or tablets so even if you can install them it doesn’t mean you will get a good experience running them.

We take it for granted but when an app is made for Android nobody is thinking about what the experience would be if someone uses a mouse instead of their fingers. You are also likely to encounter strange quirks and bugs as a result of this. Something as mundane as opening a file dialogue to upload an image can be enough to crash the whole app. Playing simple games can be a nightmare. Sometimes the app is upside down on your screen for no particular reason.

As I have said, Google, the almighty creators of Android and Chrome OS, has engineers who know the inner workings of both stables working on this and in the four years, they have had the Android on Linux feature they have struggled to fix these issues. Apple who make iOS, are in control of the hardware and created M1 cannot guarantee a good experience if you install an iOS app on Mac OS. Not even their neurotic need to control and refine everything has eliminated the oops moments. Amazon, Microsoft and Intel will struggle even further.

As I said having Android apps running on Windows is a neat trick. It kind of reminds me of those magic tricks where “volunteers” in the audience are actually co-conspirators with the magician on the stage and are kind of in on the trick. All the apps demoed by Microsoft were probably carefully selected beforehand to avoid the egg-in-the-face moments I mentioned above.

Once out in the wild eggs, rotten tomatoes and such are going to spoil all the excitement people have. Soon you will be relying on the likes of Bluestacks and Genymotion again.