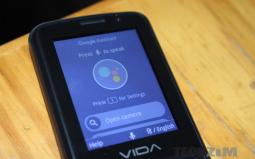 If you are not from Zimbabwe then the title might be a little confusing. What we term here as a KaMbudzi are those very simple phones that allow you to make calls, SMSes and other basic functions. The smart version of the KaMbudzi are feature phones that can onboard apps like WhatsApp, YouTube, Facebook and the likes.

These devices are particularly popular in developing countries because they are an easy entry point to all that is happening on the internet. In Zimbabwe, they are much sought after because they allow you to get on the nation’s most popular messaging app WhatsApp for a fraction of the cost of an entry-level touch display smartphone.

The company that has been leading the feature phone revolution, KaiOS has partnered up with mobile network operators across Africa. Last year the company announced a feature phone in partnership with the Econet that was at the time going for around US$30.00.

As I said before WhatsApp is pretty popular, however, there was one limitation that the application had on these KaMbudzi devices. It was that you could chat but you couldn’t make VoIP (Voice over Internet Protocol) calls and to address this issue, KaiOS has announced that users can now place WhatsApp calls on feature phones running their OS.

“People are relying on WhatsApp now more than ever to communicate and stay in touch with their loved ones. We want to support communities who are on lighter operating systems in many places around the world. Bringing WhatsApp voice calls to KaiOS-enabled devices helps us connect the world privately through a service that is simple, reliable and accessible to everyone – no matter what kind of mobile device they’re using”

So, if you have a device running KaiOS you can now make WhatsApp calls but there is a catch. The device has to have at least 512MB of RAM to do so. This means you will need to buy a higher-end KaiOS phone in order to make WhatsApp calls.

The 3G one Econet launched in partnership with KaiOS never came with RAM capacity in the spec sheet but I have a feeling that it might be well below 512MB. But you can always try updating your version of WhatsApp to see if you are able to make a VoIP call.

However, if you have the newer Vida 4G MiFi Kambudzi that Econet launched this week then according to its specs it does have 512MB of RAM. That being said, Econet never said which OS it is running but my money is on KaiOS, so that one might be a safer bet to run with for WhatsApp calls.