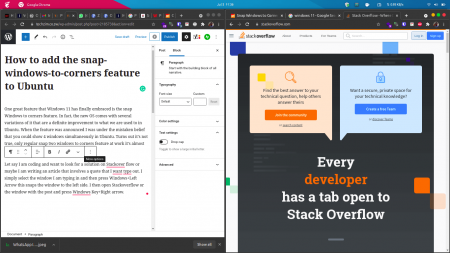 One great feature that Windows 11 has finally embraced is the snap Windows to corners feature. In fact, the new OS comes with several variations of it that are a definite improvement to what we are used to in Ubuntu. When the feature was announced, I was under the mistaken belief that you could show four windows simultaneously in Ubuntu. Turns out it’s not true, only regular snap two windows to corners feature at work it’s almost second nature to me.

Let say I am coding and want to look for a solution (more like copy and paste I am just kidding) on Stack Overflow, or maybe I am writing an article that involves a quote that I want to type out. I simply select the window I am typing in and then press the Windows Key +Left Arrow, this snaps the window to the left side. I then open Stackoverflow or the window with the post and press the Windows Key+Right arrow.

I have never had to open more than two Windows and have them display simultaneously only on my screen. Most editors such as Atom by Github, Sublime Text or Microsoft’s venerable VSCode allow you to open split panes from within them. Thanks to these features, I didn’t know that Ubuntu cannot display four Windows by default. You can not also drag a window and drop it into a corner and have it attach itself. Kudos to Windows for bringing such productivity features to Windows 11 by the way. They seem to be genuinely listening to user input.

How to give Ubuntu these super powers too

You will note that I kept saying by default, Ubuntu doesn’t do this. There is a reason for this. In Ubuntu, you can choose your preferred Desktop environment, everything is pretty modular, and the default desktop is GNOME. There are other environments like KDE, Unity, XFCE, MATE, LXDE, Cinnamon, Budgie and so on. All these already support the snap windows to corners feature.

Also, GNOME like its counterparts has a not so hidden superpower- it allows you to install extensions including themes. One such extension is the Win Tile extension which enables you to use the Snap to corners feature. It supports 2, 3 and 4 windows much like Windows 11. It’s open-source (it’s written mainly in JavaScript which I am learning) and supports GNOME 40 (yes in Linux we can have completely new looking Desktops without changing the underlying operating system).

As mentioned, you can restart your computer here the Windows way or you can do it the big boy Linux way and just restart GNOME shell i.e. the entire desktop by typing Alt+F2 and then type gnome-shell –replace in the textbox that opens up. Press enter and you should have a new desktop running. You can test this by dragging Windows and trying to snap them to corners.