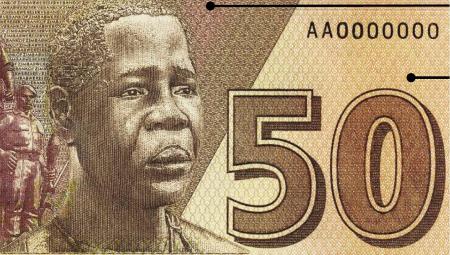 Earlier this year, former member of the Reserve Bank of Zimbabwe’s (RBZ) Monetary Policy Committee Eddie Cross said that Zimbabwe will soon get a ZWL $50, $100 and $200 note.

“The only new note which is due to come in shortly is the $50 note, and I’m not certain when that is going to be available, but it is in the process of preparation. There are already plans to introduce some higher denomination notes this year. Some time ago we made a decision in the MPC to introduce new $200, $100 and $50 dollar notes. I understand that this is being dealt with by the Governor working with the President because the President has to approve the designs and everything else. But I understand that the $50 note will be available early in the New Year.”

This revelation prompted a rebuttal from the RBZ which flat out denied that there was going to be a ZWL $100 and $200 note. However, the central bank did confirm that the $50 dollar note was indeed on the way. And today that prophecy came true as the RBZ announced that the new note will begin to enter circulation.

Too little too late?

The term “too little too late” is one that I have abused, and I am sure many Zimbabweans have done the same. This is, in my case, because it seems like everything in this country of ours is usually a couple of steps back (on a good day). What I mean is that the new ZWL $50 note is coming into the market as near as makes no difference to valueless.

Look at the price of bread, for example. A loaf will set you back around ZWL $90. This means that the new note won’t even be able to buy you one of the very basic commodities. Now, this isn’t to say that the RBZ is unaware of this. They are, but if they were to start bringing in more zeros, we would be properly back to square one.

Those of a certain age will remember the hell-scape that was the late 2000s and what came with it. If we were to see a ZWL $100 and $200 it stands to reason that the exchange rate that the RBZ has tried to contain in vain with the forex auction will go completely out of control and rupture the thin veneer of credibility that the system has on the streets.

The Govt is fortunate that Zimbabweans (out of necessity more than anything else) adopted mobile money and bank cards en masse. As well as the turn of the last decade ushering in the introduction of a multi-currency system. However, as we know, no good thing goes unpunished in this harsh economy. And we have seen the RBZ and the Govt go after the things that kept us from returning to the dark ages.

We saw the USD being banned and then unbanned. While mobile money has been neutered to the point that you really need a bank account if you want greater financial freedom. Without those two shifts (virtual money adoption and USD). It’s not hard to imagine that we would be back in the 2008 days when the money printing presses whirred day in and day out.

Those two pillars are, I think, are the only things keeping whatever stability we’re existing in now continuing.

When the RBZ announced that the ZWL $50 note was on its way, back in February this year, the price of bread was around ZWL $78. Now with a loaf nearing ZWL $100 it’s clear that, if nothing changes economically, the RBZ will introduce a denomination higher at some point in the not too distant future.

Our situation kind of reminds me of the Containment Policy that the United States used in back in the Cold War. The post World War II era saw the rise of new adversaries in the United States and the USSR. The former fearing the spread of the latter’s ideology decided to defeat or contain it where ever it sprung up.

This was of course a costly operation, with the United States paying unimaginably in lives lost and resources. In the end, the “evil” they fought to stamp out collapsed under its own weight and deficiencies. At this point, I am pretty sure those who loathed history are rolling their eyes at me, and you’d be forgiven.

My point is, inflation isn’t an enemy that we can project to collapse if the right things aren’t done. Or in the case of the United States out compete on all fronts and win because the resource deck is stacked in our favour. Trying to contain as they have with one snap regulation after another is a fruitless effort. The backlash and lasting effects of SI 127 of 2021 are a good example.

I should remind you that I am an armchair economist, but even the uninitiated can see that there needs to be deep structural change if we are to truly see progress. As things are, it would be prudent if the RBZ told it’s overworked banknote design team to start sketching because they will most certainly be needed soon.