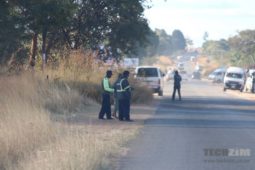 Despite the government not explicitly admitting it, Zimbabwe is in the throes of a third wave. Ever since the month began, the country has been recording thousands of cases daily, with hundreds of cases coming from each town. Faced with such a spike, the government has now decided to go back to a well-tried and tested formula. Lockdown and exemption letters.
The nation is advised that the exemption mechanism, which was used during the first lockdown in 2020, will be reactivated with immediate effect.

The nation is advised that the exemption mechanisms which were used during the first lockdown in 2020 will be reactivated with immediate effect.

Given the above challenges, Cabinet has directed that the Treasury urgently releases the first tranche of $368.2 million it had committed to funding the enforcement of Level 4 lockdown measures.

This will reinforce the current efforts of containing the spread of COVID-19. Stiffer penalties will be imposed for violations of COVID-19 restrictions, including the withdrawal of business operating licences.

As you might be aware, the entire country is now under Level 4 lockdown, following the surge in COVID-19 cases.

It has been a while now, but if you recall there have always been some kinks when it came to the letters. Initially, they were supposed to be issued by your employer, provided your employer was in the essential services. That led to a lot of abuse of the system and forgeries abounded. It was also impossible for police officers manning a given checkpoint to know if the said company even existed and did what the letter said it did.

To clear all this up, the police came up with a solution-centralisation. Instead of having officers at each checkpoint waste time and create congestion by attempting to verify each letter, all those in the essential sector who were not government employees or in the health sector would instead go to their neighbourhood police station, present their issue and get an additional letter from the officer in charge.

There is just one problem. Thanks to a lot of centralization and bureaucracy, officers in charge are busy creatures. You would be lucky to find an officer in charge at your local station, let alone get him to approve thousands of people from your suburb. So in the last iteration of the requirement, the problem was thrown at the Ministry of Industry and Commerce.

Surely the ministry knows what essential company falls under its ambits? Now assuming they do, and I am being generous here, how are they going to get each company to submit a list of essential personnel, verify this list, create a letter and send it back to the company that made the request? How will security personnel manning checkpoints verify that each letter presented to them is not a forgery?

All these issues could have been solved using technology. The bulk of people who are in the essential sector probably have a smartphone. An app from the ministry would have fixed this. If an employee is part of essential services, a pass is pushed to their phone through the app. To verify authenticity, security personnel simply scan the app. There are probably much more elegant solutions than this, but that example serves to show that technology can play a vital role in this.

We have already seen technology being adopted here in Africa through COVID passes. Hopefully, the government sees the light and makes life easier for everyone. The checkpoint app could even be part of a whole national COVID app that can be used for contact tracing.

11 thoughts on “The govt is again asking for exemption letters, technology would have made this a smoother process”