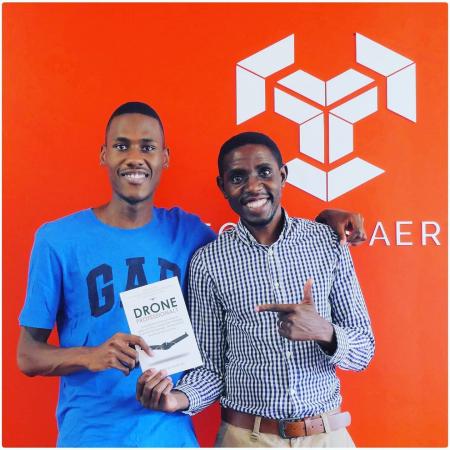 I recently had a fantastic conversation with Tawanda Chihambakwe. Tawanda is the cofounder of Precision Aerial (a local drone services and consultancy startup) and Director of Zimbabwe Flying Labs.

We talked about how Tawanda discovered the opportunities of drones, the challenges of entrepreneurship and which career options are available for people interested in entering the drone space.

Like our conversation with Pious Nyenyewa the animator, it’s a great conversation that I think will fascinate a lot of people. Anyway, because I edit these videos and listen to the conversation at least 10 times before it gets to the public, I usually have a collection of lessons I take away from the interviews which are not necessarily explicitly acknowledged in that conversation. This post takes a look at some of the lessons I picked up from the chat with Tawanda…

Before his transition to a full-time drone professional, Tawanda actually worked in media (advertising, broadcasting and video production). During this time he also had a side-hustle in FinTech and this is what led him to discover the “wonderful world” of drones, as he describes it.

When Chihambakwe realised that drones were the next big thing and he had to get in early, there was one problem. He didn’t have the money. Drones are generally expensive and Tawanda simply didn’t have the resources to buy the hardware necessary to realise his vision.

I don’t know if I should describe what he did next as bat-shxt crazy or genius but that doesn’t matter. What matters is the fact that it worked. Tawanda bought a car from a cousin and turned it into a Mushika-shika (informal taxi). You’re probably wondering how he could afford to buy a car but not a drone. Well, he struck a deal with the seller to actually pay him in instalments…

He used the profits from that Mushika-shika business as capital to start building up his drone startup. All this to say, where there is a will, there is a way…

The importance of perspective…

Once you put everything in the right perspective, even bad times can be an opportunity to refresh your appetite, your desire. — Alex Zanardi

I‘m one of those people who believe that your outlook in life generally has an impact on how great/terrible life is for you. If you come to terms with the fact that you’re going to lose then at some point you’ll be able to lose gracefully.

For Tawanda, Cyclone Idai presented a similar situation. Shortly after the devastating cyclone had occurred, the entrepreneur mobilised 20 drones and a number of pilots who would fly these drones. Their intent was simple. Let’s go to the affected areas and help as much as we can. Mapping the extent of the damage and helping search & rescue crews was some of the stuff they intended to do with those 20 drones & pilots.

The government flat out refused for them to help. Tawanda and other drone enthusiasts weren’t asking to get paid by the way. They were extending a hand but unfortunately, the government didn’t want it…

I remember speaking to Tawanda at the time and he was really baffled by this incident. Tawanda didn’t just stop at complaining as many do. He started researching how other professionals were doing it in different countries. That’s how ended up discovering Flying Labs Networks — a collective that provides, promotes and enables local expertise and leadership to accelerate the positive impact of humanitarian, health, development and environmental solutions using drones.

How visible is your brand/business

In our conversation, I asked Tawanda Chihambakwe what role YouTube was playing in their company strategy. His answer was pretty simple. Despite doing amazing work over the years there were too many companies that simply didn’t know that they existed.

What was even more shocking for Tawanda was the fact that competitors he believed to be less professional and efficient than Precision Aerial were getting noticed. He realised that the companies that had a more widespread and active presence on internet platforms had raised consciousness better than they were doing which is why Precision Aerial started to pursue YouTube and other internet channels more actively.

Given my background as a writer in tech, I’m pretty blown away by how so many Zim companies apply zero effort at using the internet to spread awareness and strengthen relationships with new customers. To me, it’s pretty simple. Existing and future customers spend so much time on the internet, it only makes sense for local companies to start following them there…

If your company has no social media presence, start thinking about how you can correct that error…

Back in 2016, Tawanda established what became the first (and probably only) Zimbabwean drone racing community. Drone Racing Zim hosted a couple of events but ultimately Tawanda felt Zimbabwe wasn’t really ready. He says they were trying to start a league at a time when people hardly knew what drones were and that made it a herculean task.

Because Tawanda has been teaching younger kids he believes the solution to that problem is building demand from the ground up. Training the kids to fly, repair and build drones is how he believes an ecosystem big enough to make drone racing and many other careers in the drone profession possible.

Whilst, this is still something in motion and we are yet to see final results that this is the approach they took to solving the problem is something I find fascinating and I feel deserves to be in this article.

One thought on “What I learned from the African Drone Professional, Tawanda Chihambakwe”