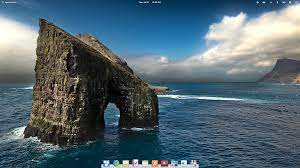 Elementary Inc recently released the 6th version of their popular Linux Distro, Elementary OS. In typical Elementary OS fashion, the latest version is named after a god. In this case, Odin Borson, the king of Asgard father to Thor and Hela protector of the realm Nine realms and adoptive father to the naughty god and Disney+ hit T.V show main character, Loki.

Elementary OS aims to be simple and easy to use so it’s rather conservative when it comes to options, what you can customise and how often it is updated. The only thing that you are supposed to change after installing it is perhaps the wallpaper. This is why it’s one of my top five favourite distros. It kind of takes the Mac OS/Windows approach where the designers make something beautiful and hope it will appeal to everyone rather than GNOME’s complex approach.

New beginners might find the Linux world so confusing. The thing is the Linux operating system itself doesn’t actually exist. You have different bits of open-source software scattered around the internet. All these libraries can be compiled, paired with a kernel, combined in different ways, customised and turned into a specific flavour of Linux known as a distro.

This version of Elementary is based on Ubuntu 20.04 which was released last year. I told you the devs were conservative kind of like the guys behind Centos OS. I know it’s dizzying but that’s just how open source works. There are literally thousands of different Linux flavours each with its own quirks. For example, the main difference between Ubuntu and Elementary is the Pantheon desktop environment.

Yes, there are different kinds of desktops too. The main ones are:

And there is Pantheon of course.

NB: You can still install old compiled apps, as opposed to Flatpaks, via the terminal using apt-get install. By default the App Center install Flatpaks. You can also install Flatpaks from other repos using the .flatpakref file of the specific app.

P.S. Technically Elementary is not a free OS. It’s a pay what you can distro. If you want to download for free just enter a 0 in the Custom $ field.