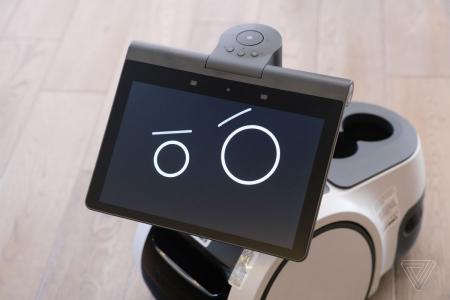 Do you remember Elon Musk’s creepy robot that I said was not useless? Well, Amazon recently unveiled their own called Astro. It looks even creepier than the Tesla bot with a look ripped right out of some Sci-Fi movie and based on what Amazon have to say for themselves it will be of some use if you have the money and are stupid enough to buy it.

Where the Tesla bot is elegant the Astro bot is nothing more than a glorified tablet on wheels. The face is just a tablet with pair of animated eyes on a black screen. Yes, they are that lazy. Check the video it’s literary a pair of circles that look hand-drawn.

The “head” which is again the tablet, is attached to a neck made out of some sort of gimbal. You know like one of those handheld thingies professional YouTubers use to stabilise their phones when taking videos in order to stabilise them and reduce the effects of shaking hands? It’s like that except it looks cooler and more next-gen.

To complete the “feet” part we have two sets of wheels that look like they are from a toddler’s tricycle. The spokes are solid and white in colour with black treads to complement the yards of white colour that’s everywhere else except the tablet. While Tesla went for the Terminator look Amazon opted instead to make a toy version of something between R2-D2 and C-3PO. If I am being blunt this looks nothing like a robot. It looks like exactly what it is-a tablet on wheels.

Use cases for the Astro

Not to sound like a broken record here but the Astro is a tablet on wheels and Amazon seems to be very much aware and proud of this fact. Some of the advertised use cases for the Astro include:

It’s not useless but

The verdict here is the same. This is not absolutely useless but that’s about it. There are already tools that do what it promises to do much more cheaply than it does. Some of these tools are from Amazon themselves so why did they make Astro. Honestly, I think it was more out of scientific curiosity rather than a genuine business endeavour.

To prove that Amazon is not even going to be selling this to the wider public. Instead, Astro will be sold on an invitation basis only sometime later this year. They are probably just after all that money people throw around during the Christmas holidays rather than looking to cause some robot revolution.

You should only get this if you have more money than sense and Amazon likes you enough to give you an invite. Personally, I can think of a dozen ways I can spend a thousand dollars. Just to be clear none of them involve me getting a robot. You could buy two PS5’s with that kind of money.