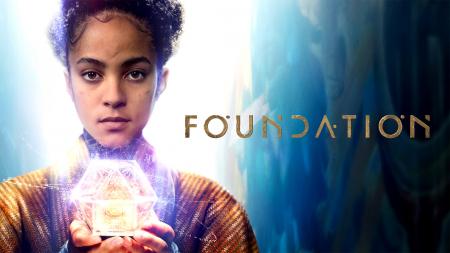 Will anyone ever make an epic series as riveting and enthralling as Game of Thrones? Perhaps but Apple TV’s new show Foundation is not that series. That’s not to say it’s bad. It’s just different, entertaining sure, but it’s not just as captivating as the early seasons of Game of Thrones were. It is comparable to the last season of GoT, which many have argued was not their best work if we are being honest.

Starts with a bang then whimpers along

Apple TV Plus is in that honeymoon phase when they have so few originals however, everything they produce is a hit. Remember that time when Netflix had originals like Sense8, Daredevil and Jessica Jones? That’s the time in which Apple TV Plus is living. Critics feel compelled to comment on and review everything they make. They also find it necessary to be kind and gentle as well.

I am not. Foundation is based on the Asimov book series of the same name. It’s more of a contemporary of Tolkien’s Lord of the Rings, Star Trek, Star Wars and Dr Who. Most of these Sci-fi works are about space and this adventure takes place in space too. The premise of the books and show is the same although Apple obviously made some tweaks they stay close to the source material:

Foundation chronicles “…the thousand year saga of The Foundation, a band of exiles who discover that the only way to save the Galactic Empire from destruction is to defy it.”

The main plot of the show and book series

Where have we seen or heard that before? That’s just Star Wars of course! Of course, they are differences like we obviously don’t have Obi-Wan Kinobi or Master Yoda. We don’t have Jedis running around carrying fluorescent tubes pretending they are dangerous light sabres. What we have is a space adventure more in the mould of Star Trek with characters dressed like they are headed for King’s Landing.

It starts with a bang and gets you all excited. Then the Maths explanations start and at this point, only the very attentive will be able to stay awake. I wouldn’t recommend watching this in the summer heat. Try watching it later in the evening when it’s much cooler and you will be able to keep up with the Tenet like concepts. Asimov was a scientist and it shows. He and in turn Apple feel the desperate need to explain all the theorems and some of the concepts upon which his adventure is based.

The thankless job of doing this was given to the main character Hari Seldon (Jarred Harris). He is the sort of man that relishes hearing the sound of his own voice. He drones on and on in drawn-out soliloquies heaping self-praise upon himself with a pompous smirk on his face that makes you instantly hate him even though he is supposed to be the good guy.

Apple continues its one episode per week tradition

Foundation’s case is not helped by the fact that they only released two episodes so you cannot binge-watch this. This is supposed to make them better than Netflix and drum up reviews. Disney does it too on Disney+. Just goes to show that traditional executives are still running the show.

I hate waiting for episodes and seriously doubt this makes shows popular and research has shown it doesn’t really boost subscriber numbers either. People just wait for all episodes of their favourite show to become available. Subscribe and watch then stop the subscription as soon as they are done.

I am a millennial. I don’t wear a tie or suit. I don’t even have formal shoes. Half the articles you see here I write wearing my bathroom robes and giant bunny slippers. I don’t have the patience to do weekly pulses. I want all episodes at once!