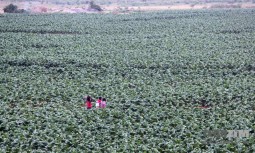 Yesterday BBC One aired an intriguing and riveting documentary called Dirty Secrets of the Cigarette Business which explores the sordid underbelly of the tobacco and cigarette business. While, to most of us Zimbabweans, tobacco just happens to be one of our biggest foreign currency earners, it turns out there is a whole dark world out there of spooks, bribes and even sabotages that we are blissfully unaware of.

This thirty-minute documentary pulls back the blinds and lares bare this world. Some rather startling secrets are revealed too. The biggest one is that the former president of Zimbabwe the late Robert Mugabe was open to being bribed in order to drop cases against British American Tobacco (BAT) one of the biggest and oldest tobacco outfits operating in this country.

BAT allegedly went down this route because they had been caught trying to sabotage another local company known as Savannah Tobacco that was just getting started in the tobacco field. It is claimed BAT was doing this using a spy network spearheaded by a South African “security” company known as Forensic Security Services under the guise of fighting the illicit cigarette trade which is worth billions of dollars. When they were caught, it is alleged BAT tried to pay a bribe of about US$300 000 via a donation to his party. It’s not clear whether the bribe was ever paid or not.

For its part, BAT has refused to answer questions involving bribes both in Zimbabwe and in other countries. They however did not deny paying the said bribe. Other documents show equally sordid dealings and similar backroom dealings. It’s an intriguing thirty minutes of revelations that will leave you stunned and educated.

How to watch the whole Documentary for free?

This is not the sort of stuff they are going to ever air on ZBC TV you can be sure of that. We will be kind and put it all down to the fact that we have only one TV station and there is only so much stuff you can fit into the programming schedule. We are not going to claim it’s because this is a political bomb that some in the corridors of power would not want you to see.

Fortunately, you can watch Dirty Secrets of the Cigarette Business for free. All you need is a UK VPN or a SmartDNS service. Both of which can be obtained for free. Just Google for SmartDNS and sign up for a service of your choice. Once you have completed the set up you can follow this link and watch the documentary yourself.