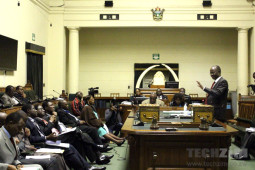 Zimbabwe remains a democratic republic. Of course, we have had contested election results which undermine that. We also turn authoritarian when it suits us. So, there’s that too.

The other thing we have consistently struggled with when it comes to democratic values is transparency. So, when the Freedom of Information Act was passed, few Zimbabweans were excited.

Now the government is getting serious about it. I assume it is because we are getting closer to the elections but what do I know. All of a sudden, the government wants to “provide citizens and the media with the right to access information as espoused by the Constitution.”

So now the new regulations are that there shall be information officers in all public and private entities. These officers shall handle information requests and disclosure of information to the public.

I really hope that the government will not be employing afresh to fill these positions. This responsibility should fall to current employees. Mthuli Ncube has actually done well as regards the government’s wage bill, let us not let his work be in vain.

I think the acid test remains Zamco. That remains the mother of all scandals as far as transparency is concerned.

The government, through the RBZ’s special vehicle, took over US$1.3 billion in bad loans from banks and used taxpayers’ funds to do so. It stank.

If that wasn’t terrible enough, CBZ was the biggest beneficiary of this ‘bailout.’ It so happened that the RBZ governor in charge when Zamco was established was the boss at CBZ when the bad loans were given. The government wants us to believe it was all just a big coincidence.

They say Zamco has been a success and has repaid the taxpayers of the full US$1.3 billion. All well and good I suppose.

So, who were the individuals and companies whose loans were taken over by Zamco? They can’t say. Why? All we can do is speculate.

You would think now that Zamco recovered most of the money, it wouldn’t matter if we knew who we really bailed out back in 2014. You’d be wrong. The government remains mum.

Several citizens, members of the media and even members of parliament have requested those names but to no avail. When Zamco flatly refused parliament, they definitively confirmed the speculations that were doing the rounds – politically connected individuals had benefitted.

If we are to believe that the New Republic, ‘seeks to give impetus to the media’s legislative reform agenda,’ we need the Zamco test to be passed. That’s probably not going to happen.

After all, not all requests for information will be granted, ‘information officers are allowed to withhold information related to defence and national security (of course), certain financial matters like proposed taxes in the pipeline (straight forward)’, and tacked on at the end is an “among others.” That’s where they will get us.

What will likely happen is that more politically connected people will get to fill the ‘information officer’ positions all the while the information stream remains stagnant.