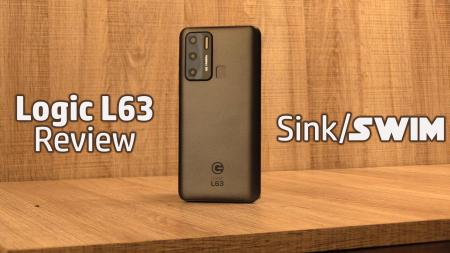 Astro decided last year that it was going to do something different with it’s smartphone lineup. The Astro brand was to be dedicated to their premium smartphone offering and the newly announced Logic brand was to focus on the affordable side of things.

We are yet to see something from their premium line of smartphones but on the budget side we have the top dog which is the Logic L63. In the box it comes with a USB-C cable and the charging brick, a silicone pouch, a pair of earphones, some paperwork and a tool you stick on the back of the phone to do stuff with like using it as a stand or a fidget spinner. You can enjoy all the vicuals in the video below.

This phone has a 6.3 HD+ IPS display with a notch up top housing the 8MP selfie camera. The buttons are over the right edge, the top edge has the headphone jack with the bottom having the USB-C port for charging and data transfer as well as holes to the left and right of the port hiding the loudspeaker on one side and the primary microphone on the other.

On the back is the triple camera module with a quad led flash as well as the fingerprint scanner right next to it. If you are wondering where the sim tray is, well this phone does not have one. That’s because it has a removable back cover AND a removable battery whose capacity is 3800mAh.

There are also 2 micro sim slots for the sims and a micro SD slot above the sim 2 slot which can handle memory cards of up to 128GB. This should make repairing this phone a whole lot easier than sealed ones, that’s for sure. But it does make it a bit thicker than other smartphones like this Itel P37.

The L63 is running Android 11 and mostly stock Android apps. Response is alright for a phone in this price range and I did not experience any lags or stutters. Even though it takes it’s time reacting when navigating the UI or open apps, it’s consistent. Almost like is a feature. Reacting at a relaxed pace.

For stuff like entering split screen mode you press the recent apps button and then long press on the app icon. This will launch a little menu where you can select split screen on the supported apps.

An interesting observation I  made is the phone comes with just 1 wallpaper preinstalled. One. I mean it’s no big deal for a lot of people because they’ll just put a custom one from the gallery and call it a day but it was interesting that this one only comes with just a single wallpaper.

But otherwise the software experience is alright. Nice and clean. Minimal bloatware and not too many bells and whistles that could otherwise compromise the performance. Software side it is focused on being usable with little to no fancy tricks.

The L63 comes with an octa core processor as well as 3GB of RAM and 32GB of internal storage. It keeps up well with the daily routine with nothing much to write home about. But that’s just on the software side of things. Both sims support 4G but only one sim at any time can connect to a 4G network. And also ZOL and TelOne sim cards are not supported which is a bummer.

The battery is small by today’s standards. Just 3800mAh which is a lot smaller than the 5000mAh units that come in GTeLs Infinity 9 or Tecno’s Spark 7 which are its main rivals. And that heavily affects the endurance test as well where after an hour each of YouTube streaming, gaming and video recording it lost 64% of it’s battery. Heavy users might struggle getting past a day on a single charge here.

Also the phone heats up a lot under stress. When the video recording portion of the battery test was done, the phone was considerably warmer than all the smartphones that have gone through the same test this year. Making the back cover removable seems to have short changed the L63 on thermal performance as well as battery life.

The display also has very poor visibility in daylight. It is highly reflective even at maximum brightness which makes it hard to use in broad daylight or very well lit environments.

The main camera is a 16MP unit with a heap of features. One that I love is the pro mode which lets me be more creative with my photos with manual control. Image quality is quite decent. The sharpness and detail is right about in line with what GTeL managed in the Infinity 9 and slightly better than the Spark 7. In some very bright scenes the highlights are a bit blown out but generally it is a capable camera.

The focus however is always hunting and usually can’t lock on what you want to be in focus unless you tap the screen and there were moments when the shutter button just froze. I hope it’s something they can sort out via software updates.

It’s a passable camera. It pretty much sits in the middle of the Infinity 9 and the Spark 7 given the focus does not let you down.

In isolation the Logic L63 is an average performer. Average battery life, average camera, average performance. It’s a phone you would consider for someone who is not too fussy about tech and just wants a phone that works.

But as a consumer I do not see a product in isolation and with the 180 dollar price tag on the L63 it makes us wonder if it has more value than the competition. And unfortunately it doesn’t both on paper and in the real world.

It has the smallest battery, the worst display and a meh camera compared to The GTeL Infinity 9 or the Tecno Spark 7, both of which are 30 and 35 dollars cheaper than it. In fact. For the same money, you can get the 4GB version of the Tecno Camon 17 which is almost twice the phone in almost every way.

In isolation the Logic L63 is average. Against other products in the market it is a complete blood bath. Even with the credit facility for civil servants it still has to contend with GTeL offering the same service.

It’s going to be a tough sell the Logic L63.