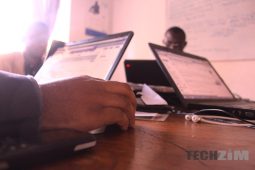 So, we have been saying for a long time that eCommerce is on the up in Zimbabwe and that’s true. We have seen a number of new services, as well as traditional players, adopt online buying and selling. Now, as great as this is, there are some considerable problems that eCommerce based startups have faced in Zimbabwe.

Yesterday, there was a Twitter Space that was hosted by Ryan Katayi, CEO of Farm Hut and Kuda Musasiwa founder of Fresh in a Box. As I went into it my expectation was it would be the usual business model talk and funding opportunities.

But boy was I mistaken… When I entered the Space, the conversation was already in full flow and the adverse effects of the pandemic was my entry point.

Moving things to and fro has never been easy in Zimbabwe even with the influx of new startups and players like Thumeza, Yaita, Mutumwa and others. What I mean is that the cost is incredible for businesses who want to offer service fulfilment for free as an incentive for customer acquisition.

Fresh in a Box founder Kuda Musasiwa said that his company had to stop offering free deliveries because they could no longer bear the cost. This meant that the locals were less likely to make purchases and companies like his are now relying heavily on the diaspora for business.

The diaspora is the only demographic that is willing to meet the cost because they unlike the majority of Zimbabweans, they can afford it.

The lack of investment opportunities in Zimbabwe

Venture Capitals rarely ever stray into Zimbabwe and on the off chance that they do, the sums offered aren’t as large as what we see being reported for other African nations.

One of the problems highlighted by Kuda Musasiwa and Ryan Katayi is that it’s incredibly difficult to make a foreign investor understand the financial gymnastics that Zimbabwean startups have to endure. The case that was simply put, was how can a local startup convey to someone abroad the currency conversions issues (black market vs Auction Rate) and the litany of statutory instruments that are levied now and again?

Investors are very sceptical about investing in local businesses because the operating environment is always in flux. This paired with regulation means that there is no guarantee that an investor or VC will make good on their investment.

The one thing that has hampered the growth of startups (or even product/service enhancement) be they eCommerce or otherwise is growth and expansion. I don’t think anyone needs telling that it takes considerable capital injection to grow a business in Zimbabwe.

During the Space, I asked Kuda Musasiwa if they had explored the franchising route to grow the business across Zimbabwe. And unsurprisingly, this is an avenue they have dabbled in. He said that it would be easier to hand over a manual with the company’s best practices than it would be for Fresh in a Box to set up shop anywhere else in Zimbabwe.

This is a way that the bigger startups could be looking to if they want to extend their reach into other parts of the country or even the continent.

The North vs South of Harare divide

The overwhelming impression I got was that if your idea is targetting the affluent suburbs of Harare, then it better be a damn good one. Because capturing that market is difficult according to Kuda Musasiwa.

He said that his company is dealing more with the “South of Harare” than the “Hills”. And the business is primarily coming from the diaspora which is buying for loved ones back home.

On that note and reiterating the point made earlier about incentives, it’s really hard for local eCommerce startups to offer customers promotions, discounts and the likes. This is especially so for the smaller companies who are going into a market that is dominated by traditional institutions, mature startups and traders who are using WhatsApp and Facebook.

Those projects are most likely going to fade into obscurity because the deck is stacked firmly against them. Unless, of course, if the idea or angle is novel. Otherwise, it is going to be an uphill battle.

The old eating the young…

Any idea needs a start, there is no other way anyone will know what is comes next unless it has been put to the test. However, on this note, it should also be mentioned that there are gaps in the market that exist between those already there in any industry.

If you launch an idea that has thousands of players and, let’s say even 10 mature players, it is going to be tough, and you are very likely going to be consumed by what is already on the market. The impression I got from the Space is that competition is good, however, filling or solving a problem that other companies have identified or haven’t even seen is where it’s at.

What this guarantees you and your business is a unique position in the market and as you mature, leverage. Your business could be the first to offer a way for Zimbabwean startups to be able to do debit orders, for example. That would be quite a feat and you’ll have B2B customers galore.

Zimbabwe is hell for startups but we must trudge on

All of the things I have said might dissuade you from starting your business but that was not the intent. What I observed in the Twitter Space is that you have to learn and constantly evolve if you want to survive.

An example of this is Gugu Siso the CEO and founder of Thumeza. She told me in the conversation we had on our podcast Technikari, that her business went through various failed iterations.

They constantly pivoted and found their niche which has delivered great success. However, all of that came with constantly learning and adapting to the market.

I guess what I am trying to say is you might launch an eCommerce startup delivering groceries door-to-door. But in the end, you could be building software for other companies to do what you initially set out to do.

All in all, it was very interesting to hear from entrepreneurs who were on the front lines. It’s often easy to forget that there is a lot of hard work and tough decisions that happen behind the scenes…