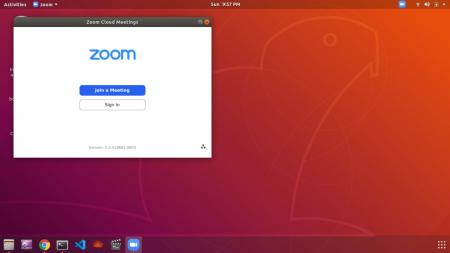 Sometimes people who have never used Ubuntu or Linux say the strangest things. This weekend for example during a casual discussion about computers one “expert” who clearly hates Linux had some pretty bizarre points to justify his stance. Things like it don’t have a GUI desktop and therefore it’s difficult to use. He also claimed you cannot install or use Zoom on Ubuntu with a triumphant smirk on his face.

That is not true. Of course, Linux doesn’t have a desktop. It has several desktop environments and you are free to choose the one you want. You can even install several of them, customise them to look like anything including Mac or Windows. There is even a guide on how to make your desktop environment look like XP in this day and age.

Here is how you can install and use ZOOM on Ubuntu 20.04

Here are the steps to install ZOOM:

N.B That’s all there is to it. Now this being Ubuntu i.e. Linux there are several other ways you could do it too. For example.

In fact, we could chain all these commands using && and just paste them to the terminal and be done with it. That’s why you see a lot of people preferring to use the terminal in Ubuntu or any other version of Linux. When you know what you are doing it’s much much easier than using GUI for some but not all tasks.

P.S If you feel like you don’t need ZOOM anymore you can always fire up a terminal and type sudo apt purge zoom. That will get rid of it completely you won’t have some weird keys dangling in your registry because there is no registry there is the /etc/ folder with plain text configuration files instead of incomprehensible keys and DWORDS. If you don’t know what a DWORD is and you have been using a Windows PC for years-shame on you!