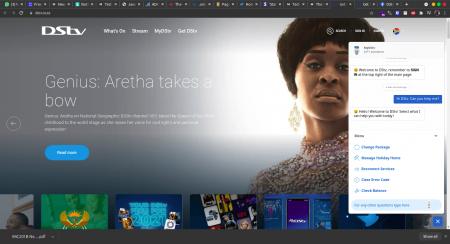 You have probably heard this before but it’s worth repeating: Streaming is going to bring about the end of satellite providers like DStv. I know what your reaction is going to be: That’s never happening in Africa because here internet is limited to urban areas and even then it’s so expensive most households would find it cheaper to stick with satellite companies like DStv rather than go for streaming.

Again it’s a familiar defence line. On the surface, it seems like a solid line of argument that is supported by facts. Most people in countries like Zimbabwe rely on mobile data and most providers like Econet and NetOne don’t even have uncapped packages which would make it possible for you to enjoy Netflix and other streaming platforms without worrying about data consumption. Most internet connections don’t even support smooth streaming and once you leave Harare you will be lucky if you can even do a speed test.

The pandemic is bringing about some important changes

As I highlighted in an earlier article on the issue, the COVID-19 pandemic has brought about some important changes that you need to consider. One big change is that for most people internet costs are now what we call “sunk costs” or unavoidable costs. If you are working from home you already probably need an internet connection anyway. From this point, it’s easier to make the transition to full-blown streaming.

If you are wondering what I am on about let me give you a brief explanation:

Still not convinced? Here is another big reason why streaming will kill DStv

The above Math will probably still leave some people doubting my argument but there is another big reason why streaming is a threat to DStv. It’s an argument you have probably haven’t heard or thought of before.

You see DStv has always thrived on the traditional geographic model of content distribution. Movie and TV show makers would divvy up the world into different regions and licence their content in these regions to different players. Now thanks to the internet they do not have to do that anymore! They can just upload a show onto their streaming platform add a CDN to speed things up and anyone can access it.

This means three things for traditional players like DStv:

NB. Of course, DStv can always stem the tide by investing in original content too. We have already seen them do this but that’s never going to be enough to sate the appetites of avid TV watchers.

DStv might never really die but it will probably be a pale shadow of itself when this decade ends.