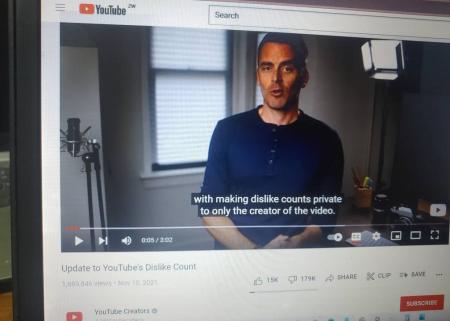 They are smoking the strong stuff over at YouTube HQ. For some reason they came out and announced they would be removing the dislike counter on videos. They said we would still be able to dislike videos, just that we wouldn’t be able to tell how many other people had disliked it too. Only the video uploader would see that count.

The internet’s response to this crazy change was not what they expected. Every single person on earth hated it, none more than me I’d like to think. Or they knew we would respond this way but figured we’d get used to it soon enough, like they said in the announcement. They do have a $good$ reason for it after all.

It was fun though to see the video announcing the change get a healthy dose of dislikes, sitting at 179K dislikes and 15K likes as I write this. Yours truly is proud to announce that one of those dislikes is mine. I just had to sneak one in before they took our voice.

Why does everyone hate the change?

The dislike button and counter is part of what makes YouTube great. YouTube co-founder, Jawed Karim, perfectly summed up why that was a bad move.

Calling the removal of dislikes a good thing for creators cannot be done without conflict by someone holding the title of “YouTube’s Creator Liaison”. We know this because there exists not a single YouTube Creator who thinks removing dislikes is a good idea — for YouTube or for Creators.

Why would YouTube make this universally disliked change? There is a reason, but it’s not a good one, and not one that will be publicly disclosed. Instead, there will be references to various studies. Studies that apparently contradict the common sense of every YouTuber.

The ability to easily and quickly identify bad content is an essential feature of a user-generated content platform. Why? Because not all user-generated content is good. It can’t be. In fact, most of it is not good. And that’s OK. The idea was never that all content is good. The idea WAS, however, that among the flood of content, there are great creations waiting to be exposed. And for that to happen, the stuff that’s not great has to fall by the side as quickly as possible.

The process works, and there’s a name for it: the wisdom of the crowds. The process breaks when the platform interferes with it. Then, the platform invariably declines. Does YouTube want to become a place where everything is mediocre? Because nothing can be great if nothing is bad.

What’s the reason that won’t be publicly disclosed?

Officially they said research, testing and consideration had revealed that the counter had to go. All to protect creators and stop the dislike-bombing trolls in their tracks and so promote “respectful interactions between viewers and creators.” Yep, that’s the SJW pandering reason given.

Of course, some were quick to point out that YouTube themselves have the most disliked video on the platform, the 2018 YouTube Rewind video. Could it be that the 19 million dislikes (one of them mine) hurt their feelings so badly they were like, ‘never again will we give them that power to hurt us?’ It’s not the main reason but it probably didn’t help.

The main reason has everything to do with YouTube making more money if some particular videos could spread out without a terrible like/dislike ratio hampering their traction. Those are the videos YouTube is paid to actively promote.

You will have noted that independent creators perform better than the huge media companies on YouTube. That doesn’t sit well with the huge corporations getting spankings from some teenager in his mother’s basement. So they have been promoting their stuff on YouTube but we are not about that and so we make it known through the dislike button and stop any momentum from building. Stephen Cobert is not what we are looking for.

Now almost all promoted content/adverts that are shoved in front of people’s faces get the same treatment. That’s not good for YouTube because these advertising firms pay according to the eyeballs they get. Hence the motive for YouTube to make it hard for us to discourage each other from watching ads disguised as content. Too bad it messes up our experience on the platform.

The change is/was rolling out slowly and so not every video had the counter missing. I, like many others, noticed that for some channels that had gotten the treatment, the dislike counter has returned.

YouTube has not officially announced that they are scrapping the bad move but it looks like that might be the case. Those of us who use YouTube for educational purposes really hope that’s the case. Why would we want a move that makes it hard to know if a video is a waste of time. So go out and dislike the announcement of this crazy move, help make it clear we won’t stand for it.

Below are my receipts. I do watch a lot of YouTube, some might say a little too much. Hence why I’m passionate about this.