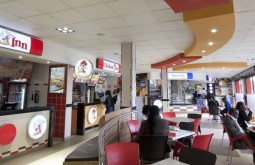 I have been enjoying the domestic remittance battle taking place. It seems there is a new player joining the fight every week. Meaning we could already have too many eaters and not enough pie.

It is a weird battle though, because we seem to have come full circle. We had solved this local remittance puzzle, then we tore it down and now we’re reviving it. It is more exciting this time around though as there are more gladiators in the ring. While I don’t celebrate business failures (mostly), I’m curious who the first to bite the dust will be. I believe I know who that is but I won’t share.

One of the newest players happens to be one of the most compelling in my opinion. Barring some otherworldly twist, this won’t be the first gladiator to hit the ground. We talked about what InnBucks is all about here.

They call it a customer loyalty and rewards programme. However, they offer wallet functionality and users can load up to US$200 into the wallet. They can use that money to purchase food at any of the Simbisa franchises like Chicken Inn. Users can withdraw that money too, just like they would with other wallets and bank accounts. They can also send that money to friends and that’s how it becomes a remittance service.

It is a bit weird to talk about remittance this way. The most common use for ‘remittance’ is for when someone abroad sends money to family back in their home country. When our families in S.A and the U.K send us money, that is what we understand to be remittance.

However, technically, remittance is just the transfer of money from one party to another. So, ‘domestic remittance’ is correct when we talk about the sending of money within Zimbabwe’s borders.

It is also important to stress that we are talking about domestic USD remittance here. At one point in our history, we mostly used the USD and did not have a local currency and so all domestic remittance was USD remittance. That’s back when EcoCash really rose to take the nation by storm.

History repeated itself and the local currency fell out of favour with Zimbabweans. We moved back to using the USD and the regulators were forced once again to allow us to send USD to each other. So, now the domestic USD remittance industry is making a resurgence.

Some of the current main players were discussed here.

In this article we are focusing on what InnBucks has to offer.

What makes for a successful remittance service?

When it comes to the use of the USD in Zimbabwe, it is mostly in cash transactions. So, when you send money to someone, they will want to withdraw it as quickly as possible. And they want to be able to do that conveniently, not to have to travel long distances to collect their money.

Therefore, a remittance service has to have as many outlets where people can collect their received funds as possible. InnBucks counts all Simbisa outlets as branches for their remittance service and there are 234 such outlets in Zimbabwe. That is comparable to the 240 postal outlets that Zimpost boasts today.

However, Simbisa is planning on adding 92 new outlets in 2022. Not all 92 will be in Zimbabwe, as some will be in the other African countries that Simbisa has a presence. We can safely conclude though that by this time next year, there will be more Simbisa outlets than post offices. Making InnBucks a leader in terms of branch network.

The only problem is that Simbisa does not have a presence in some small locations, especially in the rural areas. In towns though, most people will have a Simbisa outlet closer by than a post office or Pick N Pay supermarket that some of the competition uses.

Zimbabweans have had a rough couple of decades and will obviously appreciate lower charges on anything. InnBucks happens to be tied for the lowest domestic remittance charges with Steward Remit at 2%. Contrast that with Mukuru which charges 7% of the amount sent in commission.

Even when EcoCash was at its peak, we sometimes ran into this problem. An agent would tell us he didn’t have cash for us to withdraw. Even those that have received funds through Western Union will confirm that they have run into this problem.

InnBucks is in a good position here. The Simbisa locations happen to be flush with USD cash which they would otherwise have to bank. So, fulfilling the withdrawal requests of users is no problem.

The domestic USD remittance industry is heating up but there’s a giant that is yet to reenter the fray – EcoCash. They have extensive experience in the local remittance game and although their agent network was decimated, they have the knowledge to build it back. Not to mention the millions of users they already have. Granted, their users have been using EcoCash as a Zimdollar remittance service, but the switch to USD should be easy.

NetOne has already thrown their hat in the ring. Mukuru remains a behemoth, enjoying first mover advantages as evidenced by the best brand awareness in the market. The banks are getting in on the action and some nimble startups are suited up too. Should make for an entertaining 2022.