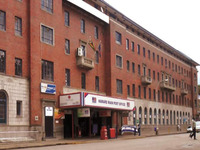 The Central Vehicle Registry (CVR), through the Ministry of Transport, has announced that it has partnered with Zimpost allowing Zimbabweans to collect their number plates at Chitungwiza, Causeway, Southerton and Bulawayo Main post offices.

“@MinistryofTID is pleased to inform motorists that Number plates are available and easily accessible at the following Zimpost offices Chitungwiza, Causeway, Southerton and Bulawayo Main”

This measure is, according to a report by The Herald, there to reduce the load at the very limited CVR offices nationwide and it makes sense because there are now three more locations that motorists can collect their number plates.

It’s estimated that there are 80,000 cars on the road that do not have licence plates and the backlog has been caused by a lack of resources to manufacture them. The Ministry of Finance reportedly set aside US$2.1 million for the materials to make the plates earlier this year that would come in three batches. The first of those batches is according to the same report by The Herald, already in the country.

As good as this is three post offices for number plates is nowhere near enough. The Ministry of Transport said that there are more locations on the way but one has to wonder why this couldn’t have been more widespread and not just in Harare and Bulawayo. Surely the close proximity between the ZimPost and the government should ensure that a program like this can be rolled out as widely as possible at inception and not incrementally over time…