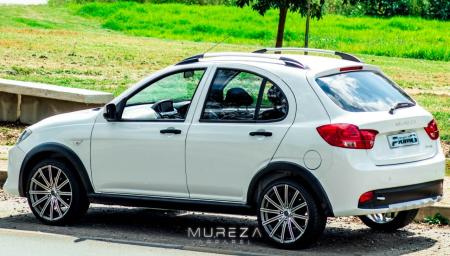 Mureza Auto, a South African-based Zimbabwean-founded car maker has announced that it will be making the plunge to electric vehicles starting from 2022.

We are happy to announce our plans to go full electric in 2022. This will start with our T1 (T-One) Concept which will ride on the AEV01 modular platform developed in partnership with Africa Battery Technologies.

If you are unfamiliar with Mureza Auto, it is a car manufacturer which was co-founded by Zimbabwean, Tatenda Mungofa together with Pheladi Chiloane and Thulisa Sosibo. The company operates out of South Africa and its current flagship model is the Prime8 a four-door hatchback (1.3L and 1.5L petrol variants) that is built on the X200 platform developed by an Iranian company called Saipa Saina. Earlier this year there was a consignment of 100 Prime8s that were slotted to hit both the Zimbabwean and South African Market.

Electric cars are the future

Mureza Auto going electric isn’t all too surprising because almost every carmaker has pledged to do so by around 2035 to 2040. The car industry is now more aware of its environmental impact as well as battery technology improving over the years making electric vehicles a viable business venture for the traditional players.

For new or small car companies, electric drive trains seem to be the way to go. Rivian is the best example of this because even though it didn’t have a production vehicle on the road for a while the company was ranked amongst the most valuable auto manufacturers in the world. The company got so much hype that at one point it had an agreement with Ford for a joint electric vehicle platform. That deal looked to have fallen by the wayside but stands as an example of the appetite for EVs these days.

As good as Mureza Auto’s move to electric is, there is the problem of charging infrastructure distribution and availability across Africa. For Mureza’s markets, in SA and Zim, it’s two contrasting tales. On the one hand, South Africa has done really well. Companies like BMW, Jaguar, Breev and Blue Plug have moved to give SA one of the best EV to charging station ratios in the world. According to the International Energy Agency’s (IEA) Global EV Outlook 2021, South Africa ranked 6th for the ratio of public chargers per EV stock by country.

On the other hand, in Zimbabwe, the case is completely different. The only big announcement around charging infrastructure that comes easily to mind is the one from Cassava’s solar division Distributed Power Technologies back in January. The only other company that has charging infrastructure installed in Zimbabwe is EVCA (Electric Vehicle Centre Africa) that are at CMED’s (Central Mechanical Equipment Department) Harare Depot.

The point I am driving at is that without public charging infrastructure, countries like ours are still going to lean heavily towards conventional combustion engine vehicles even though the upsides for EVs are far greater. For example, per unit of electricity to the cost of fuel per litre, it’s not even a debate as to which is more affordable. Furthermore, there are far less frequent service intervals for battery electric vehicles because they have no oil, filters and belts to change.

ZESA is the weakest link in this chain

That being said, the availability of electricity in Zimbabwe has been a game of Russian Roulette for more than a couple of decades. The only people who can afford to have an electric car are the only ones who can make the additional investment into a solar system big enough to go off-grid. Those systems alone run in the thousands of dollars and are as good as buying an Ex-Jap import. This narrows the market for EVs in Zimbabwe drastically because the majority cannot afford it.

The only way the complexion of this conversation can change is if the government and corporates invest heavily in replacing their own fleets with Hybrids of fully electric cars. This means that they have an incentive to make electric charging stations available in more locations which will hopefully mean that more independent power producers are brought in to meet the demand for energy.

For Mureza, much like any other company, South Africa is the place where this is going to bear fruit more than Zimbabwe. The regulators and industry there move at a pace reasonable enough to accommodate innovation.