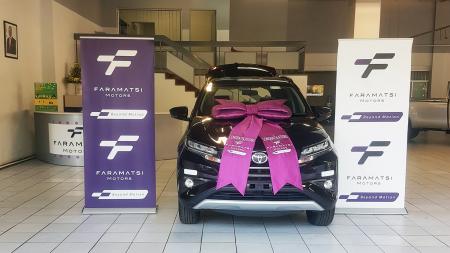 Really. They are! Ok, I know dealerships are not the most exciting places to walk into for the average Zimbo. A car sales garage is a lot more palatable and a lot less serious. However, I was brave enough to walk into one last week. Mostly because I saw a snazzy looking Toyota I had not seen before.

The dealership in question is Faramatsi Motors located corner 3rd street and George Silundika avenue overlooking the architectural marvel on one end that is the Old Mutual building and the lush summer greenery that is the Africa Unity Square park on the other end.

I need a car

Personally I am getting worn out from the pedestrian way of life. I mean in 2021 I walked damn near 2500km. So yes. It’s high time I got a metal box on 4 wheels for myself, which means I have been shopping around. A lot. Everywhere. I have been on Be forward, Facebook marketplace and even these approachable car sales dotted around the CBD.

The sort of car I am looking for. And let me preface this by saying I am no mbinga…but if you watch a lot more of my YouTube videos I might be. I am in the market for a car with a raised body and 3 rows of seats. No not a Wish. An SUV. If you are nosy and you wanna know why, it’s because I have a lot of cousins, I have filming gear I need to move around with and I don’t want to have to think about my bumpers hitting the curb whenever I park. So it’s a facelift Volvo XC90. The 2.5T petrol. The one I have on my shortlist is going for US$7500. I have been saving for it for years because I am no mbinga.

Back to the matter at hand. The snazzy little Toyota I saw in the dealership is called a Toyota Urban Cruiser. It’s a hatchback the size of a VW polo and brand new boxed it’s going for US$31 000. Definitely a long way out of my budget but it’s not a scary figure at all.

There is just US$6 000 between a 9 year old, used car in Japan waiting to be imported vs a brand new recent one parked in a show room in Harare right now.

The hits just don’t end there. With a brand new car from a dealership, you are not just buying a brand spanking new car. You are buying a car with a warranty. This means if there is a factory defect on the car, it is A LOT easier to get the problem fixed because the dealership has a direct link with the factory that made the car. And getting it fixed will be free. Only if it’s a factory defect, I had to repeat that.

You can also have the luxury of picking the colour you want. And if they don’t have it in their show room, they can literally import it for you at the exact same price as the one they have in stock. No extra charges.

There is no wait time when it comes to getting the car. You pay the money and you can drive it off the dealership floor. It’s as simple as that. And Faramatsi Motors can allow you to go home with the car after paying a 60% deposit then you can negotiate payment plans for the remaining 40% whilst you are running-in your new car.

Running-in a car is basically driving it below a certain speed for a set distance so that all the moving parts fit into each other smoothly and tightly. Only applies to brand new cars.

The biggest perk that is technical but also the most important is compatibility with the region. The basic working principle of a car is that the engine mixes air with fuel and lights that mixture up to make power. The ratio of how much air and how much fuel is mixed is called a tune and this tune is different for the same car in different parts of the world. Why is it different? Well because the density of air changes with height above sea level.

So since Japan is closer to the sea than Zimbabwe, a car tuned for Japan will be slower and will consume more fuel in Zimbabwe it is pretty much suffocating. Zimbabwe is further away from the sea than Japan and so the air here in Zim is less dense than the air in Japan.

Now cars from a dealership are only sold in a region where those specific cars are tuned to the environment they will be sold in so that they perform in the way they were intended. They won’t be suffocating. Neither will they overheat too from the semi arid conditions in these parts of the world.

It was fun walking through a dealership but I cannot afford a single car being sold in there. However, if I could, a dealership really would be the way to go. It’s just better peace of mind knowing you own something that is being driven for the 1st time, it’s got a warranty backed up my the company that made the car and that it is tuned to the conditions of the environment it is being sold in for the best possible performance and efficiency.

And being very honest, just taking a look at Faramatsi Motors, the pricing is very fair. It’s pretty much within the global average for buying that car which I find impressive considering just how pricey things generally are in our teapot shaped country.

If you are in the market for a new car and you have access to a healthy chunk of change. Take a trip to some dealerships just to know what else is out there. As for me and my peasant budget. I’ll have to settle for that 3rd hand Volvo XC90. I’m going with humble beginnings.