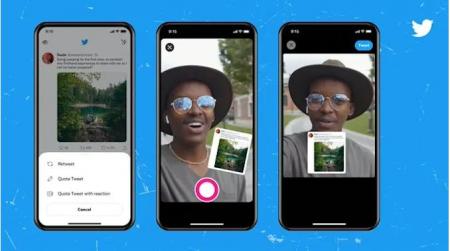 Every platform is trying to copy TikTok in one respect or another. I mean who can really blame them, the site is now the most used in the world, supplanting Google… So it only makes sense that Twitter will try its hand at the short format reaction content that YouTube and Instagram have copy-pasted from TikTok (to one degree or another). According to a report by Engadget, the new feature Twitter is testing out is called Tweet Take and will allow users to share reaction videos with a Quote Tweet.

So, essentially you will be able to react to a tweet with a video or picture and the original tweet will be embedded in the video just like on TikTok. At this point, some of you might say that this sounds like the dearly departed Fleets but Tweet Take won’t have a separate tab, it will be on your timeline.

What the user interface for this feature will look like is still yet to be known but it’s interesting that Twitter has continued experimenting with features. Some of them have been a hit (like Spaces), while the aforementioned Fleets were discontinued.

I have my doubts that this will take off though. I remember when there was a big kerfuffle about Twitter’s voice note style tweets but I haven’t seen anyone using them since the initial test/launch. Tweet Take might follow that same vein but I have to remind myself that I didn’t give Twitter Spaces a prayer and months later it’s a staple on the platform.

It’ll be interesting to see how users who will be lucky enough to test out the feature make of it.