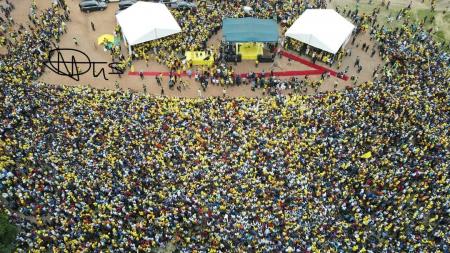 Netblocks, the watchdog organisation that monitors cybersecurity and governance of the internet, reported yesterday that Zimbabwe’s internet services degraded or were being throttled during the Citizens Coalition For Change’s (CCC) Yellow Sunday Rally.

“Network data from NetBlocks confirm a significant slowing of internet service for many users in Zimbabwe on Sunday 20 February 2022, as a major political opposition rally is held in Harare. The incident impacts multiple operators and has prevented live streaming from the Yellow Sunday demonstration by the Citizens Coalition For Change party, which seeks to unseat the ruling ZANU–PF.”

In Netblock’s report, they were unable to confirm the cause of the network operator-wide disruption. However, the organisation believes that the metrics were consistent with slowing or throttling internet services.

This peculiar event comes a week after ZOL Zimbabwe announced that it would be charging a 10% Excise Duty on Internet and VOIP services (which other operators will announce soon or were already charging). This turn of events is strange because Excise Duty is commonly charged on goods and services that governments want to discourage the consumption or use of.

“Excise duties consist of special taxes levied on specific kinds of goods, typically alcoholic beverages, tobacco and fuels; they may be imposed at any stage of production or distribution and are usually assessed by reference to the weight or strength or quantity of the product.”

If we are to draw a line between the supposed internet throttling that happened yesterday and the 10% tax on internet services. It stands to reason that there is a concerted effort to make access to the world wide web as difficult as possible for the ordinary Zimbabwean. That 10% that the government is charging Internet Service Providers (ISP) will most likely be pushed on to the consumer because with the operating environment in Zimbabwe they won’t want to shoulder that cost themselves.

These sentiments were echoed in a Twitter Space we held last week when we asked the Techzim community to weigh in on the 10% Internet Tax.

One of the attendants who contributed said that the internet should be looked at in the same light as road infrastructure is in Zimbabwe. It is a highway that links new internet-based businesses to customers and there should be no barrier to entry because suppressing the activity of those businesses gravely impacts the nation’s prospects. One can imagine how much potential revenue/business was lost to yesterday’s internet throttling and, down the line, to the 10% Internet Tax.

Moreover, this has many on social media worried that, as we enter the general election season-proper, events like this will become commonplace. And as I am sure as you can already guess it would be chaotic for not only for internet-based businesses but for everyone because we need the internet to communicate.