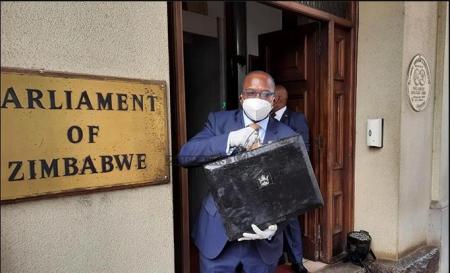 Finally the Zimbabwean government, the Minister of Finance Mthuli Ncube particularly acknowledges its double standards (somewhat). The minister has shared a document on Twitter titled, “Measures being instituted by government to enhance the domestic use of the Zimbabwe dollar.”

The important bit goes so:

a. All mining royalties are now payable in Zimbabwe Dollars up to a limit of 50% of royalties due.

C. All domestic taxes due from exporters on their export receipts are now payable in both foreign and local currency in direct proportion to the approved export retention levels. As an example, an exporter who receives foreign currency of say USD1 000.00 at a 40% surrender ratio (60% retention) will pay taxes on the 40% in Zimbabwe dollars and the 60% in foreign currency.

These measures reflect Government’s commitment to promote the wider use of the Zimbabwe Dollar and to continuously strengthen the economy so as to build long-lasting macro-economic stability.

What problem are they trying to solve by the way?

Well, the Zimbabwean Dollar has been falling at an unbelievable pace. The major underlying reason why this has been happening is that no one really wants the currency. Zimbabweans don’t believe this currency is a good store of value which in itself is a self fulfilling prophecy.

Once people believe that, they will reject the currency and want to convert it to one that they trust. By doing that, they are willing to purchase the more stable currency (the USD) at whatever cost meaning the value of the Zim dollar goes down as more and more people and businesses compete to get the USD.

When people and businesses observe that loss of value they are moved to mistrust the local currency more and they double their efforts in trying to get rid of it which devalues the currency even further and the circle keeps going in that fashion. The situation gets worse with every turn of the circle. If Mthuli Ncube and John Mangudya would speak honestly they would tell you this is where we find ourselves as a country.

Why are Mthuli’s measures a good idea?

The government itself was part of the bandwagon that has been refusing the Zim dollar even while they tell the rest of us to use it. A lot of taxes and fees are only payable in foreign currency. Now, if I can’t even pay the government in its own issued currency why should I expect anyone else to accept it?

What has been happening therefore is that there has been less and less usage of the Zim dollar. The average person probably only uses local currency when buying airtime and paying ZESA otherwise nearly everything else is priced in USD. To be honest even for airtime and ZESA some traders are selling in USD besides Techzim and others of course.

Why will it not work?

These efforts will probably not work because we are too far down the tubes now. Damage has already been done. Public perception on local money is already hostile and it will not change just like that. In fact, the public is justified in not trusting any money issued by the Zimbabwean government because the government has robbed people countless times through monetary policy.

Second reason this will not work is because this is a half measure. Not all the previously USD payable taxes are now payable in ZWL. Ncube’s statement talks of 50% here, 60% there and such. There are other fees that are still wholly payable in USD only for example fees for the new e-passports. The government is therefore still rejecting its own currency and why should people not do the same?