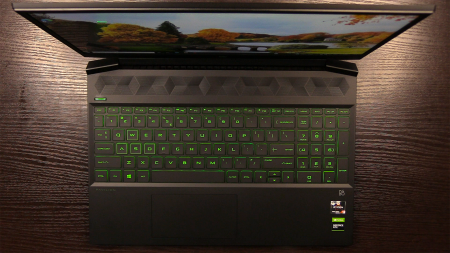 I call this one an OMEN lite because, well, same design with the sharp angles and also an overdose on the hulk juice with the green accents. It’s the HP Pavilion gaming. But is it though?

It’s a stealthy look. Matte black all round with a little green for the Pavilion and another one for the HP logo. The port situation is ok. On one end it’s just power and one full size USB port and on the other it’s HDMI, another full size USB, ethernet, USB-C, SD card slot and the headphone jack. It’s not ‘ports for days’ on this one but they are good enough.

It’s a shame that it does not come with any form of biometric authentication. No Windows Hello facial recognition or fingerprint recognition. Just plain old pins or passwords.

Now this is a 15 inch laptop but thicker than usual thanks to beefy gaming hardware and equally beefy cooling for said hardware. The hardware is an AMD Ryzen 5 5600H plus an Nvidia Geforce GTX 1650 GPU with 4GB of VRAM.

It also comes with 8GB of RAM which I feel should now be the bare minimum for any computer unless it’s to be used as a till, and 2 hard drives. So a 1TB spinny boy hard drive and a super silent 256GB M.2 NVMe SSD. Also RIP to the dvd drive.

The battery is a 56WHr unit which seems on the small size of things for a gaming laptop. For reference an Asus ROG Zephyrus M16 uses a 90WHr cell. But the AMD processors are known for being more power efficient than the Intel equivalent and also the GTX 1650 is more of an entry level GPU so again it’s not going to be pulling the same sort of power as the RTX 3060 in the M16 for example.

In terms of performance it’s a competent laptop. I mean it’s absolute overkill for someone doing web browsing, streaming, running spreadsheets and “studying”. It won’t even feel a thing with those day to day tasks

It’s made for gaming and any other tasks that demand the same sort of compute power as gaming like CAD work, light simulations, video editing and effects. But then there is an asterix. It can only handle light loads of the heavy stuff.

Let me explain. See the Ryzen 5 is a mid tier CPU on performance. After it there is a Ryzen 7 and a Ryzen 9. Even worse for the GPU because it’s a 10 series card which is 2 generations behind because there is the 20 series and the 30 series ahead of it.

So because of this, if you are to let’s say use it for gaming. On The latest AAA titles it’s going to be good for 1080p gaming at medium settings and for the rest of the games it might take medium to high graphics settings at best. I mean it’s definitely not bad but you can tell it’s a light gaming machine.

But this light gaming nature means that it’s not as aggressive on the battery and so you won’t be seeking for the socket as often as I will with this M16 even with a smaller battery. The battery meter on the Pavilion was claiming that at around 89% of battery it translated to 6 hrs 12 minutes hours of battery life whilst it was in performance mode. I can only dream of that on the M16 even in the most aggressive power saving mode.

And I guess that nicely sums it up. The more performance you ask for, the less efficiency you get. In the case of the HP Pavilion Gaming, it lies where the lines of acceptable performance and acceptable efficiency meet. It’s got more value than some of the premium laptops HP offers, which is weird. But for US$1100 it’s a very fair deal. Dare I say it’s an absolute steal…if you don’t mind the aggressive design language.