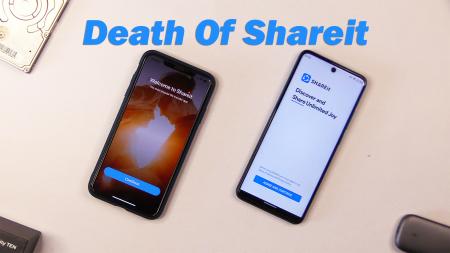 When Shareit came into the scene it was an absolute hit. It was able to transfer files tens of times faster than Bluetooth and not only that. On Android it meant you could now share apps! So if your WhatsApp had expired for example and all you had was a WhatsApp bundle, you could ask your friend with wifi at home and an up to date whatsapp to send this fresh new app to you via Shareit.

It was absolutely brilliant up until it became basically 80% digital billboard and 20% Shareit. You can actually miss the send and receive buttons because most of the screen real estate is just ads. And so it’s become finicky, slow and for the many price sensitive folk, an undesirable data bill.

But all these are now worries of the past and it’s all thanks to Google. Google essentially brought the old Shareit we know and love and pretty much added it automatically onto almost every Android phone.

It does the same thing. Sharing files at some really mind blowing speeds. For example, sending 500 photos which can roughly be 2GB of files can take as little as a minute. This feature is called Nearby Share and this is how you use it.

You go to your Android settings and search for Nearby Share. Open it and follow instructions, which is just switching on bluetooth, wifi, and location so you can see or be seen when sending or receiving stuff.

And that’s it. Now all you do is go to your gallery or file manager, select the stuff you want to share and click share. Select nearby share and it will open a little box with all the available devices near you with Nearby Share turned on.

You select the device you want to send the stuff to and this receiving device will receive a notification that asks them if they want to accept the incoming files. Just click accept and you are good to go. It’s that simple.

What about sharing Apps?

The slight drawback with Nearby Share is that you cannot send apps unless they are actual apk files in the file manager. If you want to share apps installed on your phone you then use the Google Play Store. Yes, in the Play Store you can share your installed apps and all you do is this. Open the google play store, click on your profile and select manage apps and device.

In this menu you will see towards the bottom an option written Share Apps and a button to either send or recieve. It’s using the same Nearby Share tech but perfect for sharing those apps you have installed in your phone and the best part about it is both Nearby Share and the app sharing in the Google Play Store do not use any data.

So essentially Google just developed an app to pretty much bury Shareit which is a shame. It goes to show that the experience Shareit was giving its users with a bombardment of ads was enough to get the attention of Google to create its own version of the same app.

And it’s not just Google. Other companies like Huawei also developed their own version of this called Huawei Share which again does everything Nearby Share and Shareit does but only between certain Huawei devices. The only saving grace that Shareit has is sharing files between Sndroid and iOS but that’s such a niche scenario that it won’t really be enough to pay the bills for Shareit. How the mighty have fallen.

15 thoughts on “The death of Shareit”