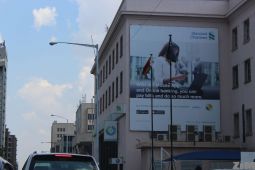 Standard Chartered has announced that it will be pulling out of Zimbabwe as well as Angola, Cameroon, Gambia, Jordan, Lebanon, and Sierra Leone. Additionally, the bank will be scaling down operations in Tanzania and Ivory Coast, focusing only on corporate banking. The reason for the complete departure (and scaling back) from these markets, according to a report by Reuters, is they made up only 1% of Standard Chartered’s total income for 2021.

“We are sharpening our focus on the most significant opportunities for growth while also simplifying our business. We remain excited by a number of opportunities we see in the AME region, as illustrated by our new markets, but remain disciplined in our assessment of where we can deliver significantly improved shareholder returns. We are grateful to our colleagues and partners in each of these impacted markets for their hard work and dedication and are committed to supporting them through this transition.”

This departure by Standard Chartered ends a 130-year presence in Zimbabwe and its deja vu because in 2017 Barclays chose to pull out of markets (including Zimbabwe) which it had a decades-old relationship with. And much like Barclays, this isn’t going to happen overnight.

It’s a statement of intent…

News like this isn’t the best because everyone will begin to worry about the money they have in their Standard Chartered Bank accounts… However, the bank has a responsibility to its clients as well as local financial authorities and it would not want to sully its name nor put itself in a difficult position with its customers.

Similar to what happened with Barclays, there is most likely going to be an exit strategy for Standard Chartered in Zimbabwe and the other markets. If you remember back in the mid-2010s when Barclays decided to exit Zimbabwe, it chose to sell its outpost in the country to Malawi’s First Merchant Bank which led us to having First Capital Bank.

It doesn’t (at this point) look like Standard Chartered is going to be taking this route, however, we can expect new details to emerge about how customers, employees and other stakeholders are going to proceed.

Could the closure of branches have been a sign?

In a report by The Herald from 2014, Standard Chartered announced that it was going to be scaling back its physical presence by closing six branched and retrenching 100 employees. Moreover, StanChart embarked on a digitisation drive in 2018 -2019, way before the pandemic where it offered branchless services to its customers not only in Zimbabwe but in Ivory Coast.

Hindsight is 20/20 and suggests that this might have been something that StanChart had been mulling over for some time but we can’t know that for sure. However, on the business end, if a set of markets are making a combined 1%, it’s hard to argue with the decision to pull out.

Overheads mount and if there is no improvement in sight an exit might be the only course of action. Added to that Zimbabwe is an economic conundrum that is a headache for most…

For now, we will have to wait and see what Standard Chartered’s exit strategy is going to look like and how it will affect its employees and customers.