The Zimbabwean government did a number on banks, suspending loans that are responsible for a third of their revenues. We know that banks are trying to engage the authorities to see if they can’t find a better solution to the abuse of loan funds by the public.

Banks are going about it in a civil way, for fear they could put a target on their own backs. We all know they are fuming in the background. If only we could get an honest reaction to the government’s measures.

For a minute we thought one bank had given their candid response to the president’s controversial measures. A paper was circulating on social media, purporting to be BancABC’s official summary and analysis of the president’s economic measures.

The paper was brutally honest and I imagine that’s how most in the banking industry feel about the government’s policies. However, the paper in question was not from BancABC.

BancABC has unequivocally distanced itself from that document. 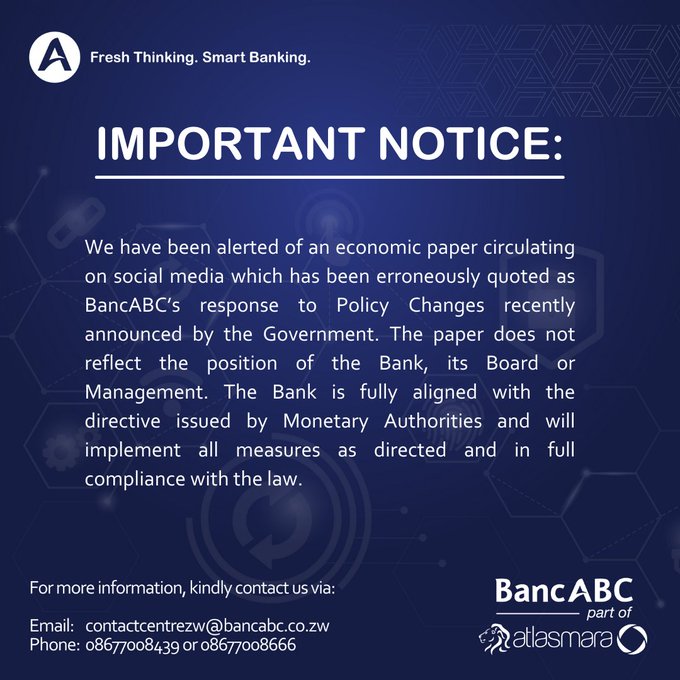 We have been alerted of an economic paper circulating on social media which has been erroneously quoted as BancABC’s response to Policy Changes recently announced by the Government. The paper does not reflect the position of the Bank, its Board or Management. The Bank is fully aligned with the directive issued by Monetary Authorities and will implement all measures as directed and in full compliance with the law.

I believe BancABC here. There is no way the paper came from them. Even if they felt that way, they would not put those thoughts on their letterhead. So that rules out this being an accidental leak in my opinion.

Besides, you can clearly see that whoever the author is did not have access to a high resolution copy of the bank’s logo. I could be wrong and this all could have been planned to introduce just doubt if the paper ever leaked. I don’t think that’s the case though.

That said, questions arise. Who wrote the scathing analysis? And even more importantly, why did they try to pin it on BancABC? Why BancABC specifically? Was the choice random or was BancABC firmly in the crosshairs?

Could this be the work of an ex employee or a disgruntled customer trying to get the bank in trouble?

Or chillingly, could this be the work of a rival bank playing dirty? We can’t rule out the possibility.

All that said, you can read for yourself the paper in question. You’ll have to agree the author makes very good points here and betrays a knowledge of the topics in question as well as access to some hard to find data.

-Gvt believes that the growth in LCY deposits has caused volatility in the FX market.
-While lending by banks has in part contributed to some level of money creation, this only represent a fraction on the drivers of FX volatility
-Growth in LCY deposit is largely blamed on huge Gvt payments in respect of local
contractors & quasi fiscal operations

-Clearly, the huge growth in LCY deposits is concentrated specific months which could be associated with the huge Gvt
payments which in turn triggered exchange rate volatility.

One thought on “BancABC distances itself from paper analysing the govt’s economic measures. Paper makes good points regardless”