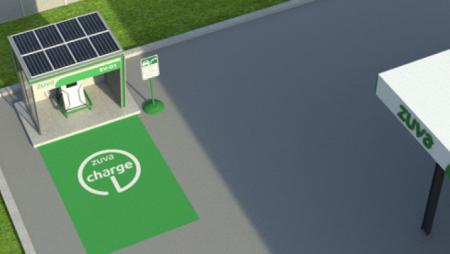 The EV revolution lives and the first big name in the space in Zimbabwe’s public EV charging network is Zuva. In a post on their Facebook page, Zuva announced that it has partnered up with EVCA (Electric Vehicle Centre Africa) to provide charging stations for Electric Vehicles at their service stations starting with the Zuva service station at Sam Levy’s Village in Harare. Below is what they had to say about it.

Local Electric Car Manufacturer EVCA – Electric Vehicle Centre Africa also known as BYD Zimbabwe has partnered with ZUVA Petroleum for the development and implementation of the first-ever Electric Vehicle charging network available for public use in Zimbabwe. The project will start with a prototype charger that is to be installed in Harare at ZUVA
Borrowdale and subsequently, electric vehicle charging stations will be installed at ZUVA service stations within cities around the country and along major highways.

The project will kick off with the installation of a 60kw DC CCS Type 2 charger which is a super-fast charger capable of charging the BYD T3 (300km Range) and BYD E6 (500km range) in less than 1.5 hours. That is to say with the BYD E6 and BYD T3, after a single charge of 1 hour 30 minutes, one can get a driving range of 500km and 300km respectively.

EVCA is very much encouraged by the Electric Vehicle Policy Framework set to be released this year by the Ministry of Energy & Power Development which is expected to accelerate the adoption of E-mobility solutions in Zimbabwe and EVCA and ZUVA as industry leaders in their respective fields have taken the bold
initiative to implement such a project before that.

Some of the Electric Vehicle models that the charging network is being developed for are available for viewing and test driving at Electric Vehicle Centre Africa located at No.31 Airport Road Hatfield Harare.

Are there no EV charging stations?

There are a good number of EV charging stations available and running but the majority of them are private installations. The biggest installation is currently at Econet and is primarily used to charge the electric Nissan Leaf Vaya taxis. EasyGo follows Econet with a number of EVCA charging stations installed for the BYD E6 and T3 electric vehicles that they are also using as taxis and airport shuttles.

Zera has a charging station that is operational in Bulawayo and 2 more in the works for Gweru and Mutare. Zera so far is the only entity that was offering a public EV charging station. Which obviously cannot begin to service the current demands of EVs in the wild in Zimbabwe at the moment.

The hope is the charging network Zuva is working on with EVCA and BYD can shift the perception of EVs in Zimbabwe from being a second car for short runabout trips for that school run and supermarket dash to being its own standalone vehicle for all mobility.

You can also read