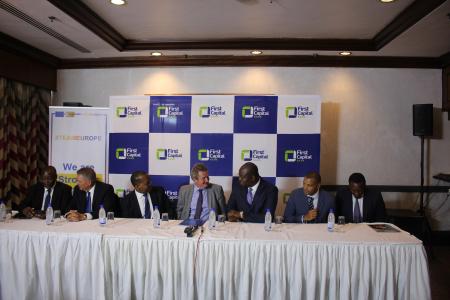 First Capital Bank today announced that it was a beneficiary bank of the European Investment Bank‘s (EIB) medium – long term lines of credit (4 to 7 years) aimed at giving Small to Medium Enterprises (SMEs) a valuable USD lifeline. Before we get into that it was interesting to see that Reserve Bank of Zimbabwe (RBZ) Governor Dr John Mangudya was in attendance at the signing ceremony for the deal. If you all still remember not too long ago the government decided to suspend lending for reasons unknown and after what seemed to be public pressure the directive was reversed, however not as loudly as the announcement to ban loans was made.

Anyway, sanity has prevailed and banks are back to what they do (lending money) and in this case, it is by way of the aforementioned EIB. This is the second facility that the EIB has partnered with a local bank, in recent memory, as CABS was a beneficiary of the EU Bank’s funding to the tune of EUR 15 million last year.

“The European Investment Bank has agreed to support EUR 15 million of new long-term financing for entrepreneurs and businesses across Zimbabwe in cooperation with leading local bank CABS. The first ever partnership between the European Investment Bank, the world’s largest international public bank and CABS, will extend loan tenors and increase access to USD by businesses in the country.”

What does this mean for your business?

As with any sort of developmental finance, there are clear guidelines as to how the money will be spent. According to the signing ceremony, there have been areas that have been identified by both the EIB and First Capital Bank. Chief among them are agriculture and productive manufacturing. The former was noted quite a lot by the delegates, particularly horticulture exports that were said to have been encouraging.

So as you can see, they are focusing the funding on what they deem safe bets and this being the second such facility that the EIB has introduced, it stands to reason that they have ample information about how well the loans have been performing.

As far as interest rates go, First Capital Commercial Director, Mutumwa Ushewokunze said that they are going to be working at a more affordable rate than the 13% that the bank runs for its usual loans for this lending opportunity with the EIB, but nothing more than that was offered.

“The interest rates are variable, this is to say there is a lower limit, but they will be much cheaper than commercial rates… We have a base minimum lending rate of 13% at First Capital, we will be significantly lower than that with this facility”

Additionally, collateral is also said to be an area where First Capital is going to show some flexibility, no concrete details were given but there were inclinations that there was some wiggle room. Moreover, all who apply for the credit facility will be assessed by First Capital Bank.

“The theme or the notion behind this facility is to encourage banks to be a lot more flexible and to step away from the traditional notion of how we look at security (collateral). We have got potential opportunities where clients are looking to build factories and in essence, we can then take the factory as security”

Unfortunately for startups (in the traditional sense of the term), this facility wasn’t designed for them according to Mutumwa Ushewokunze. This is aimed at the traditional brick and mortar businesses that earn in USD be it domestically or through exports. However, if your startup has been around for a while and has a substantial financial record then you might be considered for this line of credit. Those who want to start a business or get early-stage financing might not have any luck.

Circling back to the multiple currency side of things, there is some leeway for some businesses that earn predominantly in ZWL$ but First Capital said they will deal with that on a case by case basis.