Still wild to think the government woke up one day and outlawed the activity that pulls in a third of banks’ revenue. The government suspended all lending in the country and financial institutions are scrambling to engage them with a view to changing their minds.

Let’s look at how banks and other financial institutions will be affected by the suspension of lending.

The banking business is the lending business. That is their core business. Banks make most of their money from interest charged on loans a.k.a interest income. They also make money from fees and charges but that’s secondary income.

So, you would conclude that suspension of all lending would be a massive blow to banks. In Zimbabwe, while it is a massive blow, it is not a devastating one.

The income mix for Zimbabwean banks is a bit different. They don’t earn as much from interest income as they do from other sources like bank charges. Income from fees and charges has been growing across the globe to be fair but Zimbabwe is still a leader in that space.

Banks lend out the monies deposited with them and the benchmark is that they lend out 70% of the deposits they receive. In 2021 the loan to deposit ratio was 48.27%, indicating reluctance to offer loans.

That’s like someone giving you $100 and giving you permission to invest/spin $70 and you only spin $48. It just means you are afraid of losing the money hence why you invested only $48 of the $70 that was available to you.

This has been the complaint for years in Zimbabwe. Banks have been so risk averse, still reeling from massive loan defaults that sank other banks, that they have relied on bank charges for their survival.

Interest income has been slowly rising but it’s still not comparable to the other sources of income. 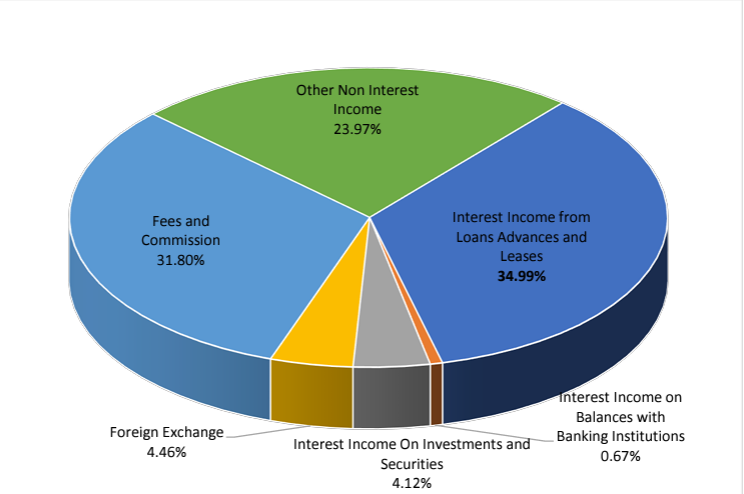 Some banks can weather the storm better than others

Losing just over a third of revenue should be enough to put some in financial trouble. However, some won’t be sweating that much. The figures above are sector averages. Different banks have different income mixes.

20% is still a lot to lose but if the sector average is 35%, there are other banks with interest income contributions way above that. Those are the ones that will feel the pinch way more.

Then again, there is always the option of increasing bank charges to compensate for lost interest income. I’m not a betting man but I would wager my life savings that charges will go up soon.

So, banks have a way to somewhat weather the storm and good luck trying to get them to lower charges when the suspension is lifted. Meaning they may actually end up in a better position when all is said and done.

Main reason this won’t affect banks too much

So, if this goes on for 2 months, the average bank would only lose 5.8% (3.3% for Steward Bank) of its expected annual income. [2/12 months * 35% (interest income)]. That’s assuming average loans granted per month won’t increase in the months just after lending resumes.

I think banks will be flooded with attractive loan applications as soon as the suspension is lifted. They can make up for lost time then.

There will be pressure from other sectors on the government to lift the suspension as I think they underestimated its impact on the economy as a whole.

Business will pressure the government

There are businesses that rely on borrowing for their operational viability and they are going to struggle and in turn pressure the government to lift the ban. Some of these businesses need loans to purchase raw materials and equipment, pay salaries and other short term expenses.

The government has been boasting that productivity and capacity utilisation have been improving in the economy and the lending suspension will work against that.

As we all know by now, Zimbabwe’s real chance of coming out of this recession is in productivity. Any measure that directly and severely affects the productivity of companies cannot stand for too long.

Look at who has been getting loans from banks and you will see how suspension of lending can only be a short term fling.

Sectoral Distribution of Loans as at 31 December 2021 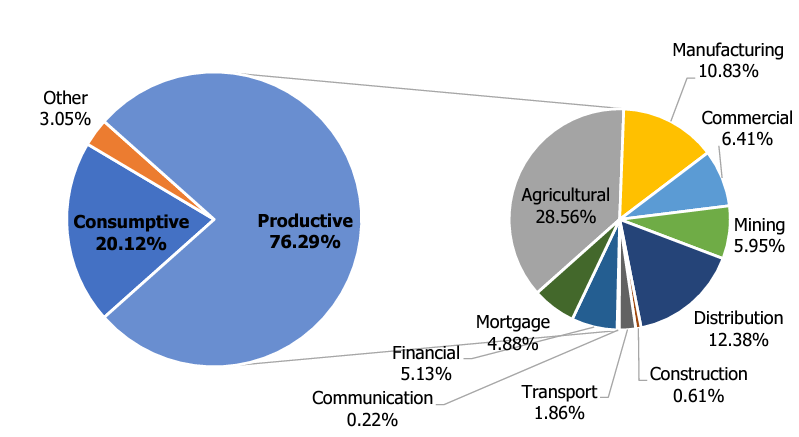 Just over three quarters,76.29%, of loans go to productive use. Of those productive loans, close to 29% goes to the government’s darling agricultural sector. Seeing as a significant number of powerful politicians run farms, those loans will be back in no time.

Whilst we are talking about businesses being affected by the lending suspension, we should note that most startups, sole traders and small businesses won’t miss a beat.

Almost none of the startups we talk to have ever gotten bank loans in their whole existence. Most also avoid microfinance institutions whose interest rates are prohibitive. That leads us to…

It is the fortunate few that have access to formal loans that do not know that there are just as many if not more financial products in the shadows than along Samora Machel avenue.

Communities have long organised themselves to pool resources and offer each other loans. Some turn to family and close friends, as many startups do and get loans on good terms.

We have maround, cooperatives and even some tame loan sharks in our neighbourhoods. Of course the break-your-legs-if-you-don’t-pay kind exists too.

Medium to large businesses hungry for credit won’t find too many products tailored for them on the parallel market though. So, I don’t think they will have an outlet until the suspension is lifted. Hence why I think the government will renege sooner rather than later.

2021 was a good year for both credit only and deposit taking microfinance institutions. The industry saw improvements to capitalization, portfolio growth, and profitability. And now this.

It’s a shame because these companies will feel the heat the worst. They do not have a sizable chunk of non-interest income like banks do. They depend mostly on interest on loans and now they can’t offer any loans.

If we work with the assumption that 95% of their income is interest income, we see that a 2 month suspension of lending activity would cost them around 16% of expected annual income. We saw that for the banks the loss of income was around 5.8%.

Let’s hope the suspension doesn’t last for 2 months because I think we would see many MFIs close shop, not all can weather a 16% cut in income.

Of course, what applies to the banks applies to MFIs also in that there could be an upsurge in loan applications when the lending suspension is lifted. They could make up for lost time then. For now, all they can do is focus on collecting loan instalments for already processed loans.

I mentioned how 2021 was a good year for them but even then, 28 credit only MFIs had shut down by the 31st of December. So the lending suspension is sure to claim some victims in the MFI industry. The longer the suspension is held, the more bodies will fall by the wayside.

How badly do we want to halt ZW$ collapse?

While there is a chance that the lending suspension will slow the collapse of the ZW$, there is an equally good chance that we will crush some legit businesses in the process.

Businesses that rely on credit, especially for day to day operations, will struggle. Whilst the banks that would have lent to them will most probably be okay.

At the same time, the MFI industry which was finally starting to grow may be set back years, with some falling off completely.

The sad part is that there were other measures introduced by the government that almost certainly guarantee that the lending suspension won’t even succeed in reversing or even slowing the collapse of our local currency. So we are likely to sacrifice some businesses and get nothing in return for it.

I leave you with Eddie Cross’ thoughts on the chances of success for the lending suspension.

The query now lies in the actions they are taking to try and implement that decision. One of the people I have talked to stated that it might work, but I would have preferred a more radical and much more straightforward package of actions.

I think this is compacted, it involves a mixture of different approaches and for that reason, it may not achieve what they are hoping to achieve.

RBZ on suspension of bank lending. Partly drawn loans are suspended too. What is the rationale behind these decisions?

14 thoughts on “With lending suspended, banks will be okay but microfinance institutions likely to struggle”