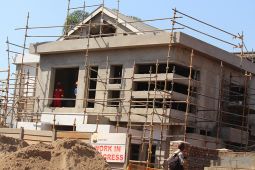 If you’re an urban dwelling millennial like most of our readers are, chances are you don’t own a house. This is a global phenomenon, millennials are poorer than the generation before them.

The Zimbabwean economy has especially been rough and official stats say about half of urban dwellers are renting. Personal experience says the actual figure is much higher. Whatever the actual figures are, the fact remains that too many people don’t own any properties.

A house is the most expensive thing most people will ever own and so the average person needs years to finance that purchase. Property.co.zw data shows that the average 1-2 bedroom house costs US$48,000 whilst the average monthly salary in the country is $230.

That salary figure is for the formally employed and most of them have ‘side hustles’ to supplement their modest earnings. Then there is the much larger group of the informally and semi-formally employed whose earnings are a mystery.

Banks should help with loans

Banks have traditionally been instrumental in helping people own houses. They enter into mortgage contracts with people where they offer loans that allow people to pay for the houses outright and then they collect monthly loan repayments + interest over many years.

Now, banks are not willing to do this when they are working with an average salary of $230. Makes sense, $230 is not enough for food and shelter and so one earning that is unlikely to be able to keep up with loan repayments.

That would be the case were it not for the fact that many Zimbabweans earn more than the official stats would have you believe. The eye test bears witness too, the congestion on our roads for one shows that many do earn more than $230 a month.

The informal economy is where most make their money and yet banks/microfinance institutions (MFIs) do not factor in this financial information when making mortgage decisions.

I understand that it’s hard to make sense of informal sector incomes but seeing as that is reality in this country, you would expect banks to at least be seriously working on ways to assess credit worthiness that factor in that information.

One local startup has decided to take on that challenge.

Tigere Housing is a proptech-fintech startup that wants to reduce the housing deficit. Their “goal is to drive financial inclusion of the unbanked and underbanked members of society through the provision of housing finance.”

The co-founders told me about some informally employed individuals they met who told them they made enough money to keep up with mortgage payments and could even pay 50% deposits on houses, double what banks usually require.

However, they did not qualify to get the mortgages because they didn’t have the traceable financial information, payslips and collateral that banks/MFIs need.

So, it is these informally employed people that Tigere is targeting and is looking to offer them housing finance. Tigere wants to ‘formalise the informal sector’ and that’s as noble as goals can get.

How will they do this though?

It all goes down to credit scoring in an informal economy. Banks/MFIs do not know how to assess the creditworthiness of the guy selling clothes from the back of his car. Even though that guy earns more than the formally employed people getting loans.

Thing is, creditworthiness goes beyond what one earns. Tigere is well aware that some people have no financial discipline and even though they earn a lot of money, they also spend a lot of money. Then there are those that are just not willing to repay loans, even if they can. I think we all know one such person.

So, how does Tigere aim to pick the wheat from the chaff? They have their own credit scoring system. This is underpinned by their alternative risk assessment tool which factors in financial information and alternative data.

Would-be borrowers have to give out information about their earnings, expenses, assets etc, the usual. What stops them from just lying since there really is no way to verify some of that information?

The psychometric test. Tigere is confident in their psychometric analysis and believes it will be able to catch any dishonest applicants. Remember, assessing creditworthiness is really assessing personality.

To Tigere, it’s not a matter of there not being enough people able to keep up with mortgage payments. There are so many people that would have no problem doing that. So, to Tigere it’s more of a willingness challenge rather than a capacity one. The psychometric analysis then weeds out those that can but are unlikely to, for whatever reason.

If you pass the test, what then?

If an applicant is successful, there are two main options. One is an incremental construction plan where loans are available to applicants as they build their homes. Need cement to build the foundation slab? Loans can be availed for renovations, incremental housing construction and purchase of building materials.

Then for the applicant not keen on building there is the option to rent-to-own a pre-built house. Here, an applicant pays a deposit and they can move into the house. They then pay a monthly charge which is part rentals, part house payment, part loan interest.

After an agreed period of time, the person should have paid up a set percentage of the house’s total cost. In addition they will also have a financial record which shows them being faithful in keeping up with mortgage payments. So the whole exercise is really about them building their credit profile.

To note also is that Tigere allows customers to make their payments however they are comfortable – via mobile money, bank transfers or cash.

Tigere will then transfer these customers over to banks. Tigere has an agreement with one local bank which says it will be able to take on such people and offer them mortgage contracts. They are in talks with other banks and I imagine a few more will want this action.

Tigere works with a client until they transfer them over to banks. After a bank takes on a customer, the contract becomes a standard bank mortgage contract. At that point the client becomes a bank client.

Also, it’s not just local banks that will be able to finance these projects. Tigere will be uploading credit profiles onto a blockchain network where investors from all over the world can decide on what/who to finance.

Tigere Housing was co-founded by old schoolmates Vusa Chimanikire and Tanaka Mhambi. Vusa came into the venture with experience in the construction industry. He founded a construction company which will also be working with Tigere on the house supply side for the rent-to-own programme.

This won’t be an exclusive deal though, they will be working with other construction companies. In fact anyone with housing stock can be a part of the programme. Tigere is in talks with such companies, including banks with housing stock.

Even when it comes to building materials in the incremental construction programme, someone will still be able to, say, buy bricks from their uncle’s micro company.

The other co-founder Tanaka came with finance experience, having worked at Deloitte and for a company in the US that was all about offering credit to low income individuals. He brings this credit assessment XP back to Zimbabwe as he and Vusa share a vision to drive financial inclusion.

Tigere got accepted and went through the African Blockchain Institute Incubator and was invited to pitch at a demo day on the 30th of June in Kigali, Rwanda.

You can see Tigere pitch to live investors and you can watch that event live here. We shall see how much they want to raise then.

I hope this works out

We really do need startups like Tigere to succeed. Without solutions like these, the house ownership dream will remain a dream for most.

Tigere is looking to fully launch later this year, around October/November. They will be building capacity till then.

I worry about the risk Tigere will be taking on. Informal earnings can be unstable, especially in a volatile economy like Zimbabwe. I realise that fixed property is, well, fixed and land usually appreciates in value. This means even when they have to foreclose on some contracts, they will still be in a good position to find a new buyer.

That is true for banks too but they are not willing to have a large stock of houses. After all, they are not in the real estate business. Tigere will not want to be saddled with a large housing stock too.

What do you think about all this? If you’re interested, you can visit Tigere’s website here and sign up. They will reach out to you when they eventually launch.

9 thoughts on “Local startup to provide housing finance to the informally employed. Yes, mortgages for those without pay slips”