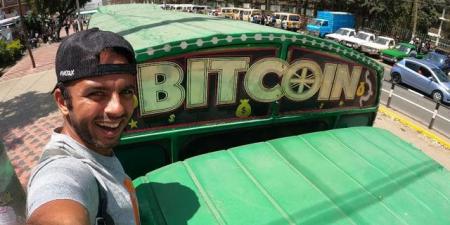 Paco De La India is a Bitcoin enthusiast who has been travelling across the world with his Bitcoin wallet and spreading the gospel of the alternative currency on his Run with Bitcoin initiative. He recently stopped by Zimbabwe on a two-city tour which started in Bulawayo.

“I have been traveling around the world over the last 6 years and going to different countries, and being an Indian Passport holder, I realized how easy it would be to have just one Passport and one single currency for everyone.”

“Well, One single passport is still far away, but 1 Currency is possible. I believe BITCOIN is the answer. I have read the Bitcoin Standard and the White paper. The adoption is still happening. Bitcoin is like a rabbit hole. And I am in there. I would like to now travel around the World and Vlog the entire journey by just using BITCOIN. I strongly believe that there are wonderful people who believe in Bitcoin too. I would love to meet you all in your city, state, country wherever you are.”

Paco believes that Bitcoin is the answer to many of the fiscal issues in Africa because of its decentralised nature. What this essentially means is that, unlike a bank, the Bitcoin transactional ledger is available to the public and is open. Secondly, he talked at length about the nature of money, saying that the United States Dollar is not backed by anything similar to our ZWL$.

This raises the question… Why not Bitcoin? You can watch the answer to that question and more with the player below or you can go straight to YouTube with the link here.

9 thoughts on “Run with Bitcoin: Crypto evangelist stops by Zim on “40 countries in 400 days” world tour”