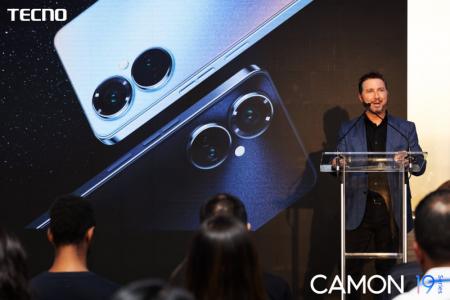 Our beloved TECNO held its first ever global product launch in the US, where they unveiled the new Camon 19 to the world. They were high up on the 65th floor of the Rockefeller when they pulled the curtain on the latest TECNO smartphone which opens a new chapter for the company.

That’s what the whole industry is doing and I kind of like it. Instead of a one size fits all approach, phone manufacturers now employ a goldilocks strategy. They play around with internal components and are therefore able to release phones with wildly different components at different price points but tied together by a similar design.

The Camon 19s pack Mediatek processors and are not too far from what we would expect from TECNO. They are solid budget and mid range smartphones and I think they will be affordable too. We don’t have pricing information at the moment.

Why should we be excited about the Camon 19 then?

The Camon 19 will be the first phone with Samsung’s ISOCELL RGBW colour filter sensor. Most of us know about RGB (red-green-blue) and how those three colours are used to create all other colours. RGBW adds white subpixels (a colour filter array) which should help this sensor capture more light, leading to brighter and clearer images.

This is then coupled with TECNO’s G+P (Glass + Plastic) lens which would have led to improved light intake even without the new RGBW sensor.

The Camon 19 series is beautiful and has the fancy colours to top it off. The Camon 19 Pro with a gradient blue looks sick.

However, I have concerns about this ‘fashion-forward’ design which they say won some design awards.

We covered how TECNO and its sister brands Itel and Infinix took over Africa. We praised them for figuring out what Africans needed and delivering on that and nothing more. A TECNO phone will give you a decent core experience without the fluff for a reasonable price.

That kind of phone works in all other developing markets and we saw TECNO and sisters enter the Asian market unchanged. But now as they try to conquer the first world we see the shift. Now we are talking about award winning designs and fancy product launches. Two things that are low on an African’s priorities but may be necessary to make a splash in America.

TECNO is taking a big step forward in internationalisation and premiumisation by integrating fashion with innovative technology.

That quote says it all. I don’t begrudge TECNO for trying to take on the lucrative America market. I think the budget and midrange is there for the taking right now. When LG died and Samsung focused on foldables, Motorola snapped up the midrange for itself and is now the third best seller there after Apple and Samsung.

Not to crap on Motorola but I understand why TECNO thinks they can get a piece of that pie. They probably can and that’s what worries me.

Will love for Africa remain?

It’s premature to talk about TECNO neglecting Africa. They still have to conquer America first and still that doesn’t mean they will neglect Africa.

However, we have seen something like this before. OnePlus started life as a flagship killer. They gave a near flagship experience for half the price of one. They roped in enthusiasts with their near-stock-Android software experience.

As they gained mainstream appeal and market share in America they started increasing their prices until they were pretty much just like the flagships they set out to kill. It’s hard to ignore the flagship space where margins are higher and no one can really begrudge them for taking that road.

So when TECNO says they are taking a big step forward in premiumisation I get worried. They are promising to get more premium and I believe premium prices will follow. That’s the exact path OnePlus took.

In the end new players rise up to fill the gap left by those that move up in the food chain. However, as regards someone potentially having to replace the Transsion brands in Africa, I’m a bit uneasy.

So many did not understand Africa before Transsion cracked the code and I’m not sure if there are other players that would create for Africa first rather than bringing in Asian market phones here.

Again, I don’t think Transsion will abandon us. I think the worst case scenario would be TECNO and Infinix becoming first world centred and only Itel remaining as an Africa first brand. I could be wrong about all this though. What do you think about TECNO taking on America?

Half of all smartphones sold in Africa are Transsion brands. How did itel, Tecno and Infinix’s parent get so dominant?

Tecno Pova 5G review. Flying too close to the sun?

Tecno Spark 8P review. Is it just me or are budget phone getting better-looking

17 thoughts on “TECNO enters America with a bang, the pessimist in me worries about them dumping Africa in the future”