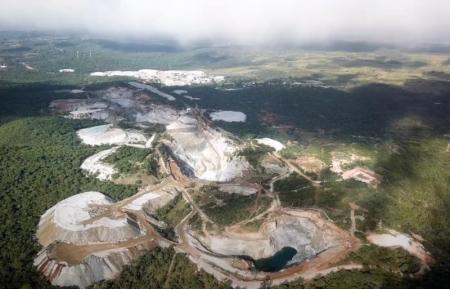 The histories of oil rich countries like Saudi Arabia and the UAE depress me. Off of one major natural resource, those countries became rich beyond their wildest dreams.

Zimbabwe may have been unlucky in the black gold lottery but in everything else, we have been blessed. How come we are closer to becoming a 4th world country than to being a 2nd world one?

When it comes to oil and natural gas, it turns out we could be more endowed than we imagined. So, we weren’t unlucky in the oil lottery after all. Apparently, we are sitting on Africa’s largest oil reserves. Besting Libya and Nigeria. Libya’s plight shows that having oil is not a guarantee of success though.

Worse still, Venezuela has the largest oil reserves in the world but as terrible as it is in Zimbabwe, we would not trade places with Venezuelans. If not properly managed, including being able to ward off powerful countries’ disruptive influence, oil reserves can be a death sentence.

As that all plays out, the (first) world is planning to move away from oil. Just our luck! As we discover Africa’s largest oil reserves, the world decides to move on from dinosaur juice. I know, the move will take decades and the third world might still need centuries to wean itself, so we still can grow rich from it. But still.

That may be but Zimbabwe will not be defeated. Even in our misfortune, we are luckier, natural resource-wise, than any other country in the world. The world is going ‘green’ and electric cars are already making a dent in global car sales.

In this green future, Zimbabwe is poised to win, we have one of the most important minerals needed to produce the batteries that will power the ‘green revolution’ – lithium.

Ah, yes, precious white oil. Lithium has many uses and demand for it is only growing. The most important use for lithium is in batteries for phones, laptops, cameras, pacemakers, toys etc and of course in electric cars.

This use case is what is driving growth in demand for lithium, the electric cars especially. Smartphone shipments may be forecasted to decline this year but we still expect to see over 1.3 billion shipped.

That’s a lot of phones, and a lot of lithium right there. Electric cars take this to the next level though. A fully charged smartphone holds about 0.0055 kilowatt-hours of energy whilst an electric car holds 60kWh. A Tesla Model S packs a 100kWh battery.

The maths works out to one electric car packing around 10,000 times more storage capacity than a cell phone. An electric car battery has between 30 and 60 kilos of lithium. This means although only 4.2 million electric vehicles were sold in 2021, they used much more lithium than the phones.

Lithium is also used in alloys that are then used in armour plating, aircraft, bicycle frames and high-speed trains. There are yet still more uses for lithium.

So high is the demand for lithium that worldwide lithium-ion battery markets are expected to reach $1 trillion by 2026. That’s just batteries. Man, it would be nice to have lithium?

Come on now, we are so blessed it is actually embarrassing. This country holds Africa’s largest lithium reserves, the fifth largest in the world. Our Mines Minister revealed that Zimbabwe has sufficient lithium to meet 20% of the world’s total demand for lithium ore.

Some experts have doubts Zimbabwe could become a major lithium producer in the world because of its instability. Oh, and apparently our lithium assets are inferior in quality to other countries’.

The quality issue shouldn’t matter in the long run because demand is growing so fast that the world will be fighting over our ‘lower quality’ lithium in due course.

Say what you want about China but they saw the green revolution coming years before smartphones and viable electric cars were a thing. They then made appropriate investments that put them in control of the future.

China controls 50-60% of mining market share and around 90% in the intermediate processing stage of rare earth elements that are also important in battery production. That’s global market share mind you.

The Democratic Republic of Congo (DRC) has the largest cobalt reserves in the world, by a huge margin. Cobalt is yet another essential element in the battery production process, although some alternatives are being looked at.

Guess what though, China controls most of the DRC’s cobalt. 15 of the 17 cobalt mines in the country are owned by Chinese interests. Investment in the mines was done before the green revolution and smartphones increased cobalt demand.

The DRC is a cautionary tale though, that country is objectively more blessed in the natural resource area than Zimbabwe. The cobalt and diamonds only seem to have attracted more misery than anything else for them.

Anyway, on to lithium again.

Talking about China and their dominance in the rare earth space, a US presidential envoy said,

It’s absolutely correct, there is a cornering of the market with lithium and other rare earths.

China has only 7.9% of global lithium reserves but they gobbled up about 40 percent of the raw lithium mined globally in 2021. You still don’t have the whole picture, China controls the lithium-ion battery manufacturing process.

-Chengxin Lithium Group acquired a 51% interest in Sabi Star Lithium mine in eastern Zimbabwe for $77m.

-Sinomine Resource Group acquired 100% of African Metals Management Services and Southern African Metals and Minerals, which jointly own 74% of Bikita Minerals for $180m.

Can Zimbabwe benefit from this?

Many Zimbabweans have mixed feelings about all this. The West considers us too risky and we remain under some sanctions and so they aren’t investing in the country. This left us with no choice but to look East.

The Chinese have been investing in this country and they have poured billions into the economy. They have also taken out billions and that’s where the problem is. It sometimes feels like we traded one devil for another, our country is plundered and we have nothing to show for it.

Some of the Chinese companies operating in Zimbabwe have been guilty of environmental damage and the Zimbabwean government does not have the gall to act on that. The Mutoko granite extraction by a Chinese company is infuriating, it is as if there is no government to protect the people from exploitation and ruin.

We cannot ignore the jobs all this investment creates though. Zhejian Huayou Cobalt says it will employ 600 locals during the construction phase, with up to 900 jobs being created when production begins. All in all, we are looking at thousands of jobs to be created and it’s hard to be mad at that.

It’s not enough though, is it? We don’t want the Chinese to just haul out lithium ore, we want a piece of the battery manufacturing pie.

Battery-grade lithium in five years or no deal

The Competition and Tariff Commission (CTC) has stipulated that battery-grade lithium be produced within five years by Zheijan Huayou Cobalt. The CTC said,

The transaction was approved subject to the condition that the merged entity, its subsidiaries, affiliates and successors in title should undertake to produce battery-grade lithium in Zimbabwe within five years of receiving this determination.

The Chinese company does not have plans to do this and says it would be too expensive. They say the power, natural gas, sulfuric acid and other chemicals needed to do that are in short supply in Africa and the costs incurred by importation would be huge and unaffordable.

We don’t know who is going to prevail in this stand-off. I think the Zimbabwe government will blink first and the dream of doing some processing of lithium before export will die. I hope that won’t be the case but I’m not holding my breath, not for a second.

Zimbabwe at a crossroads

Zimbabwe is on a precipice, the decisions we make today could propel us to a first world status or to more of the same old nonsense.

So, dear Zimbabwean, please follow along with what’s happening with our country’s lithium and oil reserves. This is our future in these Chinese firms’ hands.

It literally is in the Chinese’s hands, the Zimbabwean government does not have a stake in the mines above. Giving up control of such a strategic mineral as the world goes green is a mistake.

Some point to the archaic mining law in this country as the reason why we remain susceptible to exploitation by large corporations. Experts say the Mines and Minerals Act, which gives the President complete freedom over all mineral resources, is inadequate to decide on beneficial ownership and control of mines.

Furthermore, our burdensome legal requirements ensure locals won’t be able to get in on the action, leaving the door open for monopoly capital.

If Zimbabwe plays its cards right, it stands to gain from the green revolution. Assuming that happens, we will all be rooting for Elon Musk and Tesla to dominate the auto industry. I know there are some who hate Elon Musk but with our lithium and Musk’s Tesla’s demand for the mineral, our interests are aligned.

We want to see Teslas and other electric vehicles on every road around the world. We want Samsung to sell as many phones as possible and in no time, even our ‘lower quality’ lithium will be in demand.

On the other hand, the West could decide that a green future controlled by China is too risky, especially after seeing how dependence on Russian gas turned out to be a mistake.  If they lean back on oil, we have Africa’s largest oil reserves yet to be tapped. Either way, Zimbabwe can come out on top. Will it though?

BYD E6 Review: Enough battery range to get from Harare to BYO?

37 thoughts on “Lithium is used in phone and car batteries and Zimbabwe has lots of it. You should know who stands to benefit from it”