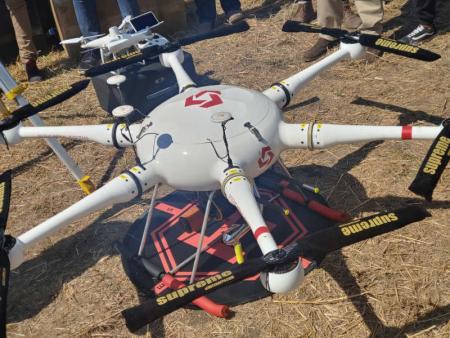 The 2022 Zimbabwe International Drone Conference concluded with a live demo day. We got to see a number of drones in action, each just as impressive as the next.

Many still view drones as toys for the rich but when you see the DJI Agras in action, carrying 30 litres of pesticide and fumigating a field, days quicker than traditional knapsack methods can, you realise drones are the future.

At ZIDC 2022 we did see the Agras in action but we also saw many other drones which are also being used in interesting ways.

Scout Aerial had a huge petrol powered drone that has crazy flight time and can carry massive payloads on display. The Wingtra they had on show can map 1000 hectares in just a few hours. You don’t want to know how long that would take and cost without the use of drones.

Iron Mask showcased the drone they use for aerial surveying and mapping, LiDAR surveys, 3D modelling and infrastructure inspections, etc.

The star of the show was a new DJI drone which was presented by Africa Drone Kings. Able to zoom 200 times while still producing usable images, the drone is a surveillance expert’s dream. 200x zoom allows the drone to clearly pick out faces from 4km away.

When that is coupled with fancy tracking software that allows the drone to follow objects even when they hide behind trees, only the price would dissuade any security personnel from getting one.

Drones are expensive. Once we get past the toy drones most think of when they hear the word ‘drones,’ we find that one has to be sure before investing in drones.

Of the drones we talked about above, many cost above US$20,000, with some breaching the US$30,000 mark. With price tags like that and no shortage of evangelists touting the wonders that drones can do, many may end up looking at them as if they were magic.

One of the takeaways from ZIDC 2022 was that drones are not silver bullets. They are merely tools that can be used to more efficiently complete certain tasks. They won’t magically fix any operational problems.

The call by Tatenda Mafara of Iron Mask and the South African Kim James of Drone Guards was that drones do not mean the fundamentals of business can be ignored. If a business is to utilise drones, they have to build a proper business to take advantage of the technology.

This all sounds like ‘common sense’ but as we know, that’s easy to say when we’re not in the trenches.

Mafara presented on the complexities of starting/scaling a drone business. What’s needed is the right hardware, software, a competent team and insurance. Even then, the actual operational plan has to be nailed down.

He gave examples of how it can be easy to fail, even with the right equipment and team. Something as simple as surveying a place 120km away from your headquarters can be a challenge. Equipment fails, the weather is unpredictable and so with limited funds, the right balance of capable equipment and a competent team has to be struck.

The industry is growing

Drone business is business like any other business, albeit with cooler toys. For it to be a proper industry, legislation has to allow for that and it’s encouraging to see that the regulators are working together with the industry.

This all means come ZIDC 2023, the drone industry will be much bigger than it is today. I hope that’s the case.

5 thoughts on “Drones that can capture faces 4km away, map out 1000 hectares in hours and more showcased at Drone Conference demo day”