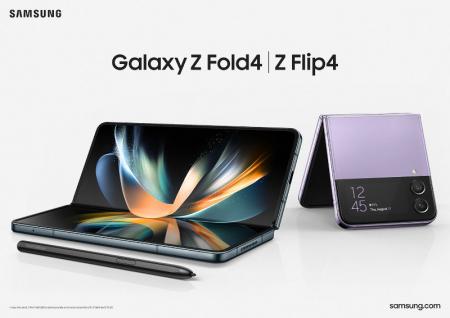 There’s a bit by Romesh Ranganathan where he says he hates Android users. He says he hates how smug they are when they announce that they are not like the sheep that use iPhones. He says, ‘you’re not off the grid, you have not unplugged from the matrix because you bought a freakin’ Samsung.’

I have to say that hit home. I’ve always felt like I’m fighting the system, the man, by shunning the mainstream iPhone. Romesh then chose violence when he reminded us that Samsung is a massive business not a family owned business owned by two brothers, Sam and Sung.

Today, as we look at the Samsung Galaxy Z Fold 4 and Z Flip 4 we are reminded that we are no better than iPhone users. These two phones, the latest in Samsung’s fancy foldable lineup are about as on the grid as it gets. Fancy? Yes. Unnecessary? You bet. Expensive? You know it. You still want one? Of course you do.

Last year’s Flip 3 was an unexpected success. The Flip is a foldable phone and that’s neat. However, it’s a normal phone when unfolded, albeit a little narrower than the candy bar monstrosity in your hand right now.

The Flip folds into a tiny little square with a small 1.9 inch screen on the outside. That is not really a useful feature to have. A normal phone that folds away only to add an extra step of opening it up when I want to use it? Who would want that?

Apparently, millions of people. And if I’m being honest, were I not a cheap man, I would have one of those babies in my pocket right now. This Flip 3 accounted for 52% of all foldables shipped in 2021 and I get that.

The Flip 4 looks to build on that success and is employing the ‘if it ain’t broke don’t fix it’ mantra. You would be hard pressed to tell the Flip 3 and Flip 4 apart. The designs look almost identical and were it not for some new colours introduced, not even Samsung could tell which was which, even at just 1 metre away.

Samsung says the Flip 4 is a fraction of a millimetre smaller in height and width with fractionally smaller bezels. However, improvements to the compactness of the hinge meant they were able to fit a larger battery in the new one, going from 3400mAh to 3700mAh.

This bigger battery can be topped up faster, supporting 25W fast charging as opposed to 15W charging on the Flip 3.

The other big change is the obvious one, the processor upgrade. The Flip 4 is powered by the Qualcomm Snaprdragon 8+ Gen 1. This processor is both more powerful and efficient than the Snapdragon 888 that was in the Flip 3.

The cameras and the display only see marginal improvements. This really was Samsung on the refinement path, there are no radical improvements to be seen.

This is the foldable that makes more sense. It is a tablet that can fit in your pocket when folded. When folded you can use the narrow 6.2 inch outer screen. When unfolded you can multitask on a gorgeous 7.6 inch screen.

Like it is with the Flips, not much has changed on the Flip 4 when compared to the Flip 3 which preceded it. A few fractions of millimetres were shaved off here and there but the design only saw refinements, nothing to write home about.

Same goes for the cameras and displays, the Flip 4 is better than the Flip 3 but not by much. Samsung doesn’t even pretend the 4MP under display camera has improved.

Unlike with the Flips, the Z Fold 4 does not get a battery bump from the Fold 3. Even the charging speeds were not improved, except for wireless charging which improved to 15W from 11W.

However, the Fold 4 also sports the more efficient Snapdragon 8+ Gen 1 and so should see better battery life even with the same battery size.

This whole package will set you back an eye watering US$1800, at least. Same as it was for the Fold 3. No iPhone costs that much and so dear Fold user, what matrix did you unplug from?

Does it help to know that the Fold 4 starts at 256GB internal storage, upgradeable to 1TB and has 12GB of RAM? It still supports the S-Pen like the Fold 3 too and you will have to decide if that’s enough for you to part with 1800 greenbacks.

You can see the full spec lists for both phones here.

Will you be buying one?

The improvements from last year’s models are not that impressive. However, last year’s models were pretty good so after these incremental upgrades we are left with some really good foldable phones. Only those with the Flip 3 or Fold 3 would not be served well by switching to these phones.

As a cheap man I could not justify a $1800 phone purchase. Especially not when I consider that for that amount, I could get an S22 Ultra AND a PS5.

I so want to be a part of the bleeding edge and nothing says ‘bleeding edge’ in the smartphone world quite like a folding phone. So if you want the best that’s out there, be prepared to pay for it. My pocket says the bleeding edge is for suckers. But that’s just me being salty that I can’t afford it.

What do you think? Do you reckon Samsung has given us good reasons to purchase foldable phones? The other litmus test is, if money weren’t a problem, would you be using a foldable phone? I would be rocking the Flip 4 if I’m being honest. Let us know what you think in the comments below.

Samsung Galaxy A12 was the best selling Android smartphone of 2021, but iPhone dominated

10 thoughts on “Samsung plays it safe with improvements to folding phones, Flip 4 and Fold 4, still impressive though”