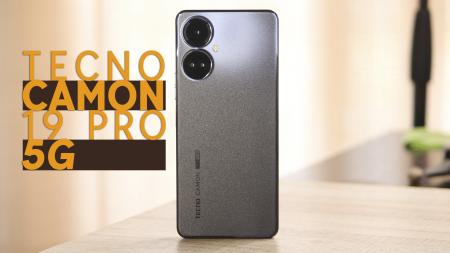 But until we get the Camon 19 Pro in the studio we can, for now, push buttons on the shiny new Tecno Camon 19 Pro 5G.

Seems like we are going full circle on smartphone design. The Camon 19 5G has a flat front and back as well as the sides. You can actually get it to stand on any of its 4 sides on a flat surface with no problem.

The whole body is made of plastic which will not have that premium feel you may be used to if you let’s say used a Camon 18 Premier. It still looks nice but definitely does not feel as premium.

That aside it’s what I would call weather friendly. It’s not as cold to the touch as the more premium metal and glass devices. It also means the back will be more resilient to cracks and shattering if it so happens to violently come into contact with a hard surface.

The finish on the back is a satin-like texture which does a decent job with fingerprints and scratches. There are 2 large camera circles on the back. The top one houses the main 64MP sensor and the bottom one is the usual dummy camera situation. I thought we talked about this Tecno.

Anyway, next to the camera rings is a very bright quad-LED flash with the Tecno Camon OIS 5G etched on the back below these camera rings.

On the right edge, you have the volume buttons as well as a power button with a fingerprint scanner embedded in it. Which I personally think makes more sense than an in-display or a rear-mounted scanner. Think about it. More often than not you want to unlock your smartphone when you press the power button. It’s logical.

The left edge has the sim and SD card slot combo supporting 2 nano sims and an SD card all in one. The top edge houses the earpiece as well as the secondary microphone and on the bottom edge is where you get the headphone jack, primary microphone, USB-C port, and the main speaker.

On the front, the display is nice and flat with a punch hole for the 16MP selfie camera. No LED for the selfie flash on this one. One thing I noticed for sure is how much thinner the side and top bezel has gotten. Good job on that one. It looks slick and the display itself is a 6.8-inch, FHD+ IPS LCD supporting up to 120Hz refresh rate!

If I am to ignore the materials and dummy cameras I actually love the design of the Camon 19 Pro 5G. It’s clean and elegant. It’s not trying too hard.

The Camon 19 5G is running on Android 12 with HiOS 8.6 on top and the guys at Tecno are always bringing some new bits in with every new iteration.

When running an app that uses the camera or the microphone you’ll get a little green dot on the extreme top left to make you aware. If you are not sure whether it’s the camera or microphone that is being used, you can scroll down the notifications tray and the green dot will turn into either a microphone icon or a camera icon.

And if you have no idea which app is using the camera or microphone you can just tap on the same icon which then will give you a popup of the app using these hardware bits on your phone. Some useful stuff right there.

The Camon 19 comes with an FM radio built-in but to move with the times without neglecting Africa they have done what the big boys in the smartphone world skipped on. An FM radio app with online radio built in.

So if you have the internet and the capacity to stream online radio you can within the FM radio app but also if you are off the grid or streaming radio is a luxury you cannot afford, you can still plug in your pair of earphones and listen to local radio channels broadcasting in your area. Very progressive thinking.

There is also MOL which is a translation assistant. Yes, I know we have google translate but what was interesting for me is how this one works. It allows you to type something in your language. Then translate it to another language and then send it without jumping between 2 apps. It works right there in the text field of whatever chat app you are using.

So you type whatever you wish to type, Highlight it and select the option that says “Translate” and then pick the language you are using and the language you want to translate to. It works better than I expected for translating Shona from English.

Lightning multi-window is another. With simple gestures like swiping up with 3 fingers, you can send an open app to floating window mode and open another app and when you are done with the other app you can just maximize the app in the floating window and resume where you left off.

It’s pretty useful when you are on WhatsApp and you want to search for something really quickly on chrome then go back to WhatsApp.

As much as the software has a number of good and useful features, it’s also got its fair share of flaws.

The overall software experience is clunky. When you are entering and leaving apps there are short moments of stuttering that happens with the animations which do a disservice to the 120Hz display.

The display panel itself is also not executing the smooth 120Hz well. Whilst it definitely is getting a 120Hz signal from the CPU, the pixels themselves are not responding fast enough. So the faster you scroll, the less sharp the images displayed will be. So in the end the experience I was getting with 120Hz on the Camon 19 5G was not as good as the 90Hz on my Huawei Mate 40 pro.

It’s such a shame that the software experience is clunky. It then makes the Camon 19 5G feel like it has room for improvement. It’s worth pointing out that the devices I have are for testing and not the retail versions so this might be an isolated incident and because it’s software it’s something that an update can take care of.

Regardless I didn’t experience any app crashes or even slow app launches. The stutter when entering or leaving apps seems to be cosmetic only and does not hamper the overall speed of the device.

It’s also got the memory fusion tech so even though it has 8GB of RAM it can expand it to 11GB at the user’s request. How this works is it takes advantage of the faster internal storage of the smartphone. A portion of this storage which Tecno quotes as up to 3GB is assigned to the duty of RAM in the event that you need the extra memory. The unit I have also has 256GB of storage which is plenty for the majority of users.

Battery performance is also not the best, especially compared with other devices in the Tecno lineup. It has a 5000mAh unit which faced a 51% power drop after our 3-hour endurance test. The Tecno Spark 7 for example, faced a 32% drop in battery life with the same size battery and the Camon 18 Premier with a smaller 4750mAh battery only faced a 40% power drain.

I’m thinking it is a combination of 2 things causing the Camon 19 to have poor battery life compared to its other siblings. Software optimization and the fact that the refresh rate was pinned at 120Hz putting the power draw in a worst-case scenario for it.

In the end, the performance of the Camon 19 5G is good enough. It’s not the fastest Tecno you can get and neither is it the most power efficient. But maybe the cameras will change that.

Really the Camon 19 5G has 2 cameras. A 64MP rear camera and a 16MP selfie camera. It’s a great camera. The dynamic range is nice and balanced and you get some good background blur when going up close with subjects thanks to the sheer size of the main sensor.

There is a 64MP mode if you want to use the full pixel count of the sensor. By default, it sticks to 16MP with pixel binning which allows it to take photos with better detail. The AI mode pretty much improves the vibrance in photos. It’s not a blanket filter over the whole photo but it tries to detect elements in the scene you are taking and then enhances part of it. The results are quite impressive. The Camon 19 5G will take some very good-looking and clean photos.

As for videos you can take up to 2K QHD clips with added OIS where the camera sensor moves around to compensate for the shake in your hand and produce a smoother video experience. The good thing about it is that there is no cropping into the sensor when stabilizing video as is the case with EIS so videos are sharper with more detail.

It’s pretty good. You won’t be getting the flagship experience like the one in the Phantom X but it’s still a pretty good camera. It can do the job.

In low light, you start to see some graining in both photos and videos. It’s got a night mode to take better shots in challenging environments but it does not do a good job. I think they could have done without it on this one.

The Tecno Camon 19 pro 5G is tough to place. US$390 seems a bit steep for a Camon. On paper, it’s got the specs to justify the price. It’s good-looking, it’s got a 120Hz display, 8GB of RAM that can be expanded to 11GB, and 256GB of internal storage expandable to 512GB with an SDcard.

Even the software has some very useful bits in it suited for Africa and even some that the established players are not really bothering with regardless of them being quite useful. Sadly on the Camon 19 Pro 5G, it seems its biggest strength is also its biggest weakness. Full disclosure though, this device is a test unit and so it might not be running retail firmware so the software optimization issues dragging it down might not exist in retail versions.

These optimization issues affected 2 major parts of my experience with the Camon 19 Pro 5G. Battery life and smooth user experience when getting in and out of apps and navigating certain UI elements.

The biggest one for me is just how it feels like Tecno took a few steps back with the Camon series. The Camon 18 Premier from last year uses the same chipset as the one in the Camon 19 Pro, It’s got a more versatile camera system. The display is a beautiful OLED panel with the same 120Hz refresh rate and the materials and the build quality can trick you into thinking it’s a flagship smartphone. If you need the latest Tecno Camon and you are not fussy about 5G I recommend the non-5G variant of the Camon 19 Pro. Otherwise, I still feel the Camon 18 Premier from last year is still the Camon to get. There is a reason why it was the best midrange smartphone of 2021 and it’s probably cheaper than the Camon 19 Pro too. Let me know what you think in the comments.