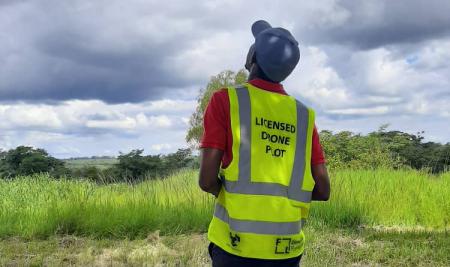 Day 1 of the 2nd edition of the Zimbabwe Drone Conference kicked off yesterday. It’s an event that had the regulator for Zimbabwe, CAAZ speaking on laws around operation of drones and UAVs in Zimbabwe.

There is also a startup developing a product called a Drone Logbook which does logging of a wealth of statistical data on drones including flight time per drone, licence renewals and audit data.

Kenya flying labs showcased drone work they have been doing within Africa which included using drones to deliver packages and payloads such as medicine in inaccessible areas as well as a project they are working on with the Department of Defence in the USA to make a solar powered airship again for delivering bigger payloads in a more economical manner.

Drone Guards is another drone company using drones for security and surveillance. They contract their services to businesses , private security companies and the SAPS. The drones they operate also have thermal imaging camera to track suspects or criminals in the dead of the night.

These are just a few of the many presentations done on day 1 of the Zimbabwe Drone Conference.