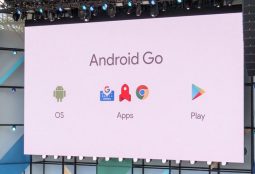 We were just talking about Itel phones and their popularity. There’s a lot to praise about them but performance is not one of those things. You will get by with an Itel but you will be taught patience along the way.

What’s crazy is that it could have been worse. Android has been getting leaner over the years and budget phones today run much better than in years past.

If you ever got the chance to see a Samsung Galaxy Pocket in action you will know what unusable really looks like. That little thing had nothing going for it as it struggled massively to run full-fat Android. It did its best with 256MB RAM and 3GB usable storage but it was doomed to be a dumpster-fire.

When we say Itel phones do not perform all that well, it is when we compare them to much more expensive options. The budget experience has been improving over the years. And it significantly improved when Google launched Android Go back in 2017.

Android Go is a lighter version of Android that runs better on weaker hardware. It is designed to run decently on smartphones with 2GB of RAM or less. It also uses less data than full Android.

Being lighter, it also takes up less storage, up to 900MB less according to Google.

I have seen someone being forced to delete something before they could open WhatsApp. Budget phones skimp out on storage to hit those sub-$60 prices like with the Itel A33. You can see how having the operating system come 900MB lighter is a big deal in entry-level phones.

It doesn’t end with the OS. There are Go versions for many essential google apps. I have used YouTube Go before and when you’re trying to squeeze out the most from a data bundle, that is a fantastic little app. These Go apps consume less data than their fat cousins.

You will find Maps Go, Gallery Go, Gmail Go and many other Go apps. For the best experience, when using a budget phone one should also pick the Lite versions of most apps e.g. Facebook Lite, Messenger Lite and Twitter Lite.

These Go and Lite apps will not only take up less space on your phone but they will also have unnecessary and resource-intensive features scaled back, meaning the weaker processors in the budget phone will run those apps better.

If you’re seeing a budget phone stutter with Go apps, you don’t want to see what the full version would do to it.

You can see how Android Go is a big deal for entry-level phones. The stuttery performance we complain about would be much much worse if Android Go was not a thing.

Google says there are now 250 million Android Go active devices. When we talked about Itels, we noted that the P38 Pro 5G was the most popular one with the Itel buyers we talked to. It runs Android Go as do many other Itels. That’s where the 250 million is coming from.

The adoption of Android Go seems to be picking up steam too. Back in December 2021, there were 200 million active devices and almost 10 months later that has grown by 25%.

Google also announced that Android 13 (Go edition) will be coming in 2023. I hope for your sake that your Android go running phone will get that update because it brings a sweet new feature. It comes with Google Play System updates which will allow you to get updates directly from Google rather than waiting for Itel or other manufacturers to push them.

Of those updates Google says,

This will make the delivery of critical updates quick and simple without compromising storage availability on the device. The result is a phone that stays up to date over time — and you don’t have to wait for the next release or a software push from your phone’s manufacturer to have the latest and greatest

I wish we all got our updates directly from Google. Lucky Go users will be getting that in 2023. Android 13 (Go edition) will also bring some of the features available in the full Android 13.

However, you should note that the minimum RAM requirements for a phone to run Android 13 (Go edition) have doubled from Android 12 Go. You will now need to have at least 2GB of RAM. The RAM requirements of Android Go versions have been rising since launch. Guess there’s no escaping inflation.

The RAM requirement should not be a problem for most Itel users though as many popular models start at 2GB. Even the $55 Itel A33 Plus comes with 2GB of RAM and should be able to run Android 13 (Go edition).

KaiOS, where art thou?

I still think KaiOS is the best option to get all Zimbabweans on the internet. KaiOS-running phones can be had for less than $20 and they have their own kind of internet experience.

That may be but Android Go has its place and it looks like the market is warming to it.

Android Go Was Made For Countries Like Zim, But It Might Never Get A Chance To Shine