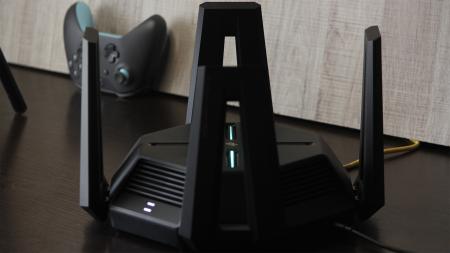 There are normal routers. Nice and compact ones with support for 64 connected devices, which also blend in with the furniture. Nice, modern, and sleek. But what if normal is boring and ultimate excess is more of your cup of tea…like me. Then you get a router that comes in a behemoth of a box.

It’s absolutely large so let’s take it out of the box. It comes in a hard styrofoam package that looks like it’s literally from a video game. A care package in PUBG or something.

There is a lock on the crate and after some fiddling, I got it open. The sheer size of this thing is comical and the fact that it looks all the way scifi. It’s like aliens and transformers made a router. Wait. Transformers are pretty much aliens. You know what I mean.

It’s very heavy. I’ll give you a fair warning there. It’s a lot of hardware and there in lies the heft. Trust me you have not seen a home wifi router this substantial in size and weight with active cooling. Yep, it’s got a fan in it. It will not blend in with any furniture that I know unless we are talking about a gamer’s man cave.

Taking a tour around it. There are 4 StarWars-looking antennas with 3 stages where you can unfold them. Right at the top are the Mi logo and an X which is an indicator light for what’s going on with the router like whether or not the internet is available. Or it can be set up for RGB color cycling.

It’s a hexagon design meaning it has 6 sides. The front face has indicator lights. One for the system and another for the internet. White is right, orange is carnage. The left edge has a mesh button and next to it a USB-A port which is version 3.0 for fast transfers. We will talk more about these later.

On the right face, we have got the power port and the reset button and right at the back are 5 ethernet ports. 4 of them are regular gigabit ethernet with one also capable of WAN connectivity. The 5th port is blue. It’s different because it supports a throughput of 2.5 gigabits per second and is made for WAN connectivity.

So setting it up is pretty straightforward unless you are in Zimbabwe, Which I am. You need the Mi Home app to be able to manage this router. I already had it but I set it up with Zimbabwe as my region. That proved a hindrance when trying to get the setup wizard to sort things out so I can get access to the router management. I ended up switching my region to the UK because that is just my default when Zimbabwe doesn’t work. It’s also really rare to not find the UK in such scenarios.

Now there are a lot of labels and buzzwords on this router that will definitely make many of you feel quite dumb. 4K QAM, 2.5G high-speed port, 2.4G, 5G, and 5G game. Confusing right? Look. It’s all just speed. All of it just denotes the different ways in which they have put tech in this box to improve network speed. But this is LAN speed and not your internet speed. That one is managed by your service providers like Liquid Home, Telco, or Telone. So if you just need a router for wifi in your home and that’s it then you definitely do not need this router. It’s too expensive and unreasonable for a boring old home wifi network. What this router is all about is this.

Offices, schools, places with a lot of wifi users.

This router supports up to 248 devices which is a lot. If you picture other household wifi routers available in most Zimbabwean homes and offices, they support up to 32 devices for the low-end ones and between 64 and 128 devices for the higher-level ones. So this one can do about double what other normal consumer-grade routers can do. What this means is a more stable connection for more devices off a single router.

For those needing more coverage area and capacity, you can get another one of these and use that mesh button we saw earlier to double the number of devices that can connect as well as cover about double the range.

Wifi 6 is the highlight feature of the Mi router. It’s just a bit of an upgrade from the previous generation of Wifi and without getting all boring with networking jargon it improves on stability and speed. That’s the important bit.

And it really shows. Streaming files from PC to PC and from PC to other devices like smart TVs and smartphones was really good. Large bitrate video files were playing with no buffer. Really I have no complaints.

And as the cherry on top, that USB port on the side of the router. It can be used as a media-sharing platform over LAN. You can connect a hard drive to it and anyone with access to that Wifi can make use of the content on that drive.

So you can have such a setup in the school library for academically related content like open source software, free-to-share video documentaries, and even soft copies of notes. And at home, you can make it a media server for photo and video backup to a storage platform that you have control over and also anyone you allow can access. No more Shareit shenanigans for sharing those pics and videos.

Business critical tools for employees can be put on there making it not only easier to make them available to everyone but also reducing traffic that you send over the internet. Imagine if you are in media production and you just have everything you need uploaded onto the LAN. The possibilities are endless.

This one router puts its capacity to good use. It by default kicks things off with 3 virtual networks inside it. Basically 3 wifis in one. What this allows you to do is separate traffic into its own network.

For the home, this feature can be used to organize different types of devices. The best use case is the slower WiFi network can be used for smart devices or IoT devices like speakers, alarm systems, cameras, lights, and sensors. Then faster Wifi can be used for computers, mobile devices, and smart TVs that use up a lot more data or need the extra speed for media streaming over the network.

And for businesses there can be a guest network where visitors to the business can access their own wifi and an internal network where employees will be connected to their own separate wifi. It’s amazing for security because it means a curious guest will find it absolutely difficult to get access to the part of the network that employees holding sensitive data will be connected.

And speaking of security, this router supports WPA3 which is the latest wifi password encryption method that is a lot harder to crack than WPA2 on non-wifi 6 routers.

The Mi Home app is your best friend when managing the router. It’s got a heap of features and a really easy-to-use interface to manage traffic on the router. You get everything from the virtual networks and security for each network to what rights each connected device will have when accessing the media storage device on the network.

You can set limits on upload and download speeds so that one person on the network does not take it down grabbing all the bandwidth. You can view each device connected to the wifi and see how much data the device has consumed as well as its current download and upload speed. You can even go as deep as selecting which sites a specific device is allowed to access, the time of day a specific device is allowed access to the network and if it’s an unknown device you can straight up blacklist it on the network.

This router is definitely extreme. Both in looks and features. And the reason it is so is that just like anything targeted at gamers it’s extreme and uncompromising in every way. I mean the thing has RGB lights on it. On features and performance, it’s even showing more promise on paper than the Asus ROG Rapture GT-AX6000, another extreme gaming router costing 80 bucks more than the Xiaomi AX9000

It’s got a lot of edge cases where it offers more utility than most other consumer-grade routers. The ridiculous 248 device capacity, the 2.5Gigabit WAN throughput. Media sharing over LAN with a dedicated USB port and a more secure AND stable wireless connection than lesser routers.

What it is built for is the edge cases where uncompromising performance and stability are of utter importance and that is in online gaming. The connection cannot be compromised. However, for domestic usage, it’s just overkill for so many people. A regular router is very sufficient. Also, Wifi 6 is a 2019 standard and so very few devices support it, pouring sand on one of the router’s key selling points.

As for small to medium businesses, this might be the router that offers the sort of net benefits that could help them in security, network uptime, and bandwidth management. And even if you don’t have a dedicated IT guy, the Mi Home app makes it a lot easier to set the router up and manage most of the stuff on it. Including making the lights on the router match precisely the color of your business.

Oh, and for the nerds in the room, the AX9000 4K QAM on one of the router’s antennas is an easter egg. AX is the Wifi 6 standard IEEE 802.11ax, 9000 is the total theoretical bitrate this router can process. 9000Mbps. 4K QAM is 4096-bit Quadrature Amplitude Modulation, the tech that it’s using for a 20% increase in wifi connection speeds. You learn something new every day. Catch you again next time.

8 thoughts on “Xiaomi AX9000 review. The most extreme Wifi router”