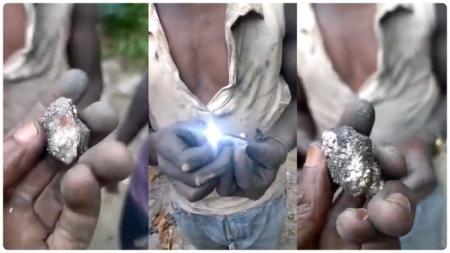 The Democratic Republic of Congo (DRC) is a natural resource-rich country. So, when claims started popping up talking about fancy new electrically charged rocks found there, we all wanted to believe.

The claims, all over social media, said the rocks worked like natural batteries. They claimed you could pick one up and it would be good to go straight from the ground. There were even video demonstrations showing the stones spark when they touch each other and one of the stones power a lightbulb.

Thinkpieces about how this could change Africa’s electricity challenges poured out as you would expect. How could they not when the claims were that 1kg of the electrically charged stones could power a two-bedroom house for two months?

Household power for two months from just a kilogram or a gram of the stuff powering a bulb for 72 hours is the stuff of dreams. That’s why the rocks were nicknamed ‘Vibranium’ after the fictional element from the Black Panther movies.

There happens to be yet another mineral-rich country in the shape of a teapot and some started claiming the game-changing rocks had been found in my hometown of Kadoma.

If only it were true

Turned out the rocks had been found all over Africa in the last few months. It was odd that these discoveries seemed to coincide with the release of Black Panther 2 late last year.

It wasn’t odd, it was exactly as it appeared. Experts have dismissed the claims as utter nonsense. I don’t think we needed the experts on this one but here’s what they had to say.

There are other issues like negative and positive electrodes. That and the other components of a battery would need to be present in the rock for it to work as a battery. It is highly unlikely that these rocks have these components.

So, it was good while it lasted but we have to touch base on earth. Let the fantasy die a quick death and let’s return to our golds and diamonds, no fancy battery rocks. We can let our imaginations run wild but now let’s do that with the knowledge that there is no Vibranium in Kadoma in real life.

Lithium is used in phone and car batteries and Zimbabwe has lots of it. You should know who stands to benefit from it

43 thoughts on “Sadly, claims that electrically charged rocks (vibranium) found in DRC and Kadoma are false”