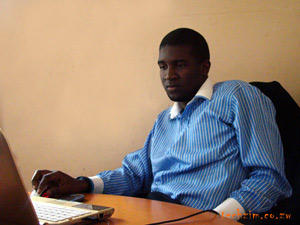 We visited the Nhava founders yesterday at their Livingstone offices in the Harare Avenues. We had an interesting discussion with them; from how Nhava was founded, their vision, the range of laptops and expansion plans.

Nhava is the technology company that launched the Nhava range of netbooks last year in April. The Nhava netbooks became the first locally designed and branded laptops in Zimbabwe. The reception by the Zimbabweans was mixed; general acceptance by mainstream consumers but some skepticism by from the tech community. Such has been the typical response to new ICT gadgets entrepreneurs. Especially those linked to the east.

Tinashe Shangwa, the Nhava CEO, revealed to us yesterday that the founders have sold a sizeable stake to local entrepreneur, Rugare Chidembo. Chidembo is former nonexecutive director of KMAL, and is now MD for Pinnacle Holdings. He’s is also part of the consortium of local entrepreneurs who acquired Econet’s shareholding in Kingdom Meikles Africa Ltd (KMAL) in September last year.

According to Shangwa, the move was necessary to recapitalise and help fund a local assembly plant for the company’s products. The local assembly plant will be commissioned before the end of 2010. Currently Nhava laptops are manufactured in Hong Kong, where Nhava outsources the work to technology partners.

The Nhava CEO also disclosed that they sold a modest 500 units last year but are looking to sell tens of thousands this year. The company has surpassed last year’s total units. Nhava is banking on the recent approval by the government’s Salary Services Bureau of a stop order facility with Nhava to enable civil servants to buy Nhava laptops on a hire purchase scheme.

Asked about the not-so-positive perception the tech community in Zimbabwe has about their products, the Nhava CEO had this to say: “It’s not a one day process to gain trust especially from that particular sector. You win them one by one, day by day. Since we launched, we’ve managed to gain some loyalty from that group of people. They are hard to get to your side, but we’re getting there.”

On the product front, Nhava will be launching a tablet PC called the Nhava Maestro to compete with some international tablet brands entering the market. The Maestro and a few more new Nhava gadgets will be announced at Nhava’s one year anniversary to be held in Harare in the coming weeks.  There was mention of a Nhava smartphone as well. Interesting.

Tinashe Shangwa said he’s touched by the Nhava products’ impact on the lives of some ordinary Zimbabweans. “Our vision is to put a laptop in each and every household in Zimbabwe” he said. He narrated how a 54 year old civil servant buying a Nhava recently, expressed his joy:  “handina kumbobvira ndakafunga kuti ndichaita computer yangu” (I never dreamt I’d own my own computer).

Current laptop models on sale include the Nhava Mist, Laser One (pictured below), Cross Over, Companion,  Hero and Viara. Prices range from US $405 to US $900 depending on the processing power and size of display. All machines come with a 1.3MP webcam, Wi-fi, a 160GB hard drive. We didn’t get the specs of the processing speed of the laptops, but they’re all Intel powered.

We’ll post the transcription of the full interview here at a future date. Check back.

15 thoughts on “Nhava Sells Stake To Rugare Chidembo, To Push Tens Of Thousands Of Nhavas This Year”